Ormandy's recording of Grieg's Peer Gynt Suite was originally made on wide frequency range lacquer masters, from which the original issue on shellac 78 rpm discs was dubbed in somewhat degraded sound. The original lacquers were later transferred to tape for LP issue, and it is from this superior source that the present remastering was made. The sound is a testament to what Columbia's engineers were able to accomplish years before magnetic tape was available.

The recording of the Sibelius suite has an interesting history. In 1950, The Swan of Tuonela was recorded and released on a 10-inch LP (ML-2158), coupled with Finlandia (both previous issued on Pristine PASC 177). Some twenty months later, Columbia taped the other movements and repackaged the existing recording of Swan into the new LP issue. The resulting hybrid release remains one of Ormandy's greatest and most exciting recordings, more intense even than his critically-acclaimed stereo remake for EMI from 27 years later, with almost superhuman playing by the Philadelphia Orchestra in the final movement. 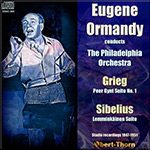