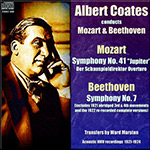 "A correspondent has reproved me for my temerity in attributing great virtues to symphonies of Mozart and Brahrns in a recent review. He approves my remarks on the Mozart work, but suggests I have taken leave of my senses in allowing that there is any beauty in the Brahms. When his musical education has passed beyond the elementary stage he will discover that one does notexalt one composer at the expense of another : that one must cultivate the historical sense and understand a composer's relation to his time, the effect of environment upon him, and so forth finally that the whole art of music is one's kingdom and not any one state in it. My correspondent may be surprised to learn that there are people who regard Moz,art's music as fussy and superficial. Here, in addition to a lack of perception, is also a lack of the historical sense. Mozart was no revolutionary ; he adopted many of the conventions of his time, as a study, for instance, of his piano sonatas will prove. Even in his greatest works passages sometimes occur which are merely eighteenth century platitudes ; but it would be ridiculous to decry his music on that account. Appreciation, as has often been said, is criticism ; criticism is not faultfinding, but an estimate based on a knowledge of all the facts.

A long preamble to Mozart's so-called Jupiter Symphony in C major—the last of the " big three " ! It is a graceful tribute to Mozart that the premier companies have contributed each one apiece. Let us recall the substance of what Jahn says of these three masterpieces : " The first is a triumph of beauty in sound, the second a work of art exhausting its topic, and the third is in more than one respect the greatest and noblest of the symphonies." The work we are considering is of an epic character compared to the others ; there is an Olympian stride in the very first bars, followed by a quietly tender passage. Here is a formula - -fortepiano—which marks music of this century, but Mozart infuses rich life into the convention ; on the other hand, the quickly reached dominant cadence seems as platitudinous as Handel's descending scales ; but wait awhile. After the pause it is a delight to follow Mozart's treatment of his theme and recognise with joy the delicate wood-wind elaborations he contrives. The second tune gives an opportunity for the bassoon to join in with the first violins. A sudden outburst on a chord of C minor, after a silent bar, is unexpected and doubtless agitated the conservatives of the period. The music derives from the opening bars and the stress is maintained up to the double bar, after which a repeat is made. When this is passed Mozart gently lifts us out of the key of G into that of E flat, extending the ideas recently heard through some enchanting modulations and wood-wind colours. The striding figure of the opening bars dominates the music, firmly leading it back to the recapitulation. This time the oboe joins the bassoon and first violins in the delineation of the second tune. The tonic and dominant end justifies what appeared to be padding at the start, but is now heard to fit perfectly into the scheme.

The slow movement is dramatic rather than lyrical as the first bars suggest. In the Sturm und Drang of the music following the flute is lost on the record, and elsewhere the same fault occurs ; could this not be remedied 1 What Gounod called the " divine lyricism of Mozart " appears in the second tune ; it is in thirds on strings, bassoon, and oboe. A delicious string repartee pops up presently and is then imitated by the flute—audible this time. The horns are touched in with unerring instinct just before the repeat. The weakness of the flute is apparent in the development section, where, being occasionally overpowered by the oboe, the outline of the melody is changed. This section has a lot of rapid string passages very well recorded, even when the 'cellos and double basses are playing ; the bassoons come out splendidly also.

The Minuet is well known in arrangements, but perhaps one may draw attention to the bigness of conception maintained here, as in the other movements of the symphony, the exquisite shifting harmonies at the end of the Minuet, the cunning of the trio with its oft-repeated " Amen " cadence. It was a daring stroke to begin a section with a full close.

The finale, allegro motto, is tremendous. Having regard to the small orchestra at Mozart's disposal, it is amazing what a volume of sound lie must have contrived for his musical thoughts, expressed on the largest scale. The significance of the label "Jupiter " is best perceived here. The movement ends with a great fugue into which are woven all the little fragments of tunes heard before. Notice especially the one at the start, and the assertive scalearpeggio one a little later. After a pause the composer begins to treat his first idea semi-fugally, beginning with the second violins. Unfortunately the 'cellos and double basses entries are inaudible on the record. Other little bits of tunes bob up including a jolly extension of the second idea—a flute and bassoon duet over rapid string passages. The whole section is repeated after this. The two chief melodies are worked in opposition, preparing the way for the fugued finale. This, a quintuple fugue, occupies the last pages of the score and is a reg-ular whirl of sound, an extraordinary contrapuntal feat in which, gradually, the great Jupiter theme—the scale-arpeggio one—assumes dominance, drives all the rest from the field, and so, ends Mozart's farewell to the symphony. It is a magnificent gesture and we may, listening to it, recall the composer's words in a letter to his father : "As death, strictly speaking, is the true end and aim of our lives, I have for the last two years made myself well acquainted with this true, best friend of mankind, that his image no longer terrifies, but calms and consoles me . . . I never lie down to rest without thinking that, young as I am, before the dawn of another day I may be no more ; and yet nobody who knows me would call me morose or discontented. For this blessing I thank my Creator every day and wish from my heart that I could share it with all my fellow-men." Noble, prophetic words. A man who could write thus was already great in spirit had he never created a note of music. But the spiritual heights revealed in this letter, allied to such exquisite musical genius, gives us the full stature of him whom the French composer truly called divine.

The last side is taken up with the sparkling little overture to the Impresario. This one-act opera was written between the Seraglio and the Marriage of Figaro. It is an enchanting jeu d'esprit.

The recording is very good with the exceptions alluded to above. Mr. Coates, as might be expected, stresses the epic quality of the music ; this sometimes gives an impression of roughness, but altogether it is a fine, vital interpretation. "