Hanson conducts rare recordings of symphonies by Piston and Cowell

Plus Loeffler's Poem for Orchestra all in superb Mercury Living Presence

XR remastering by Andrew Rose at Pristine Audio, June 2011
Cover artwork based on a photograph of Howard Hanson 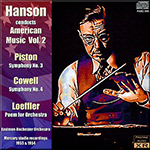 The evolutionary-paced bloom of Piston's Third is strongly controlled by Hanson. The conductor must have warmed to its sonorously unhurried heroism

Hanson's Fourth Symphony (there are seven) is sumptuous. The music wells up in great gouts of sound. Everything is burnished and regal with a slow sovereign eruption of melody. If you know his first three symphonies all issued by Universal in stereo then you will instantly relate to this throbbing convulsive music. I am not sure that the Requiem title and movements add solidly to the music, They stand as sincere indicators of the moods and senses the composer had in mind. The music was written in memory of Hanson’s father. The very short Dies Irae recalls his gritty propulsive way with the fast movements in the first and second symphonies and link in turn to The Rite and Rimsky's Antar. The finale is Lux Aeterna which is also the title Hanson gave to an earlier work for orchestra. The sense of striving and majestic heavenly flight and bell-tolling is there again. Hanson is, as ever, a master of building the romantic climax as he was to be again in the glorious Sixth Symphony. So it proves here though the work ends in taciturn rather than refulgent style.

PASC 302 is volume 3. We start with a very early work by the wondrously log-lived Carter. His The Minotaur is dynamic, virile, brutal, burred, tense and atmospheric. It’s not short on Stravinskian high voltage. It can be cool as well as in the miraculous Ariadne, Princess of Crete and poignant as in Theseus’s Farewell to Ariadne which brings a lump in the throat as much as Bliss’s music for Hector’s Farewell to Andromache in Morning Heroes. Wallingford Riegger’s New Dance is more sumptuous and sounds lavish though not to diffuse its shatteringly savage rhythmic howl, blast and electric ripple. The Macdowell Indian Suite derives from the early 1890s – another era. The music is Lisztian, tenderly romantic, fleet-footed and only very faintly ethnic – a slight overtone in the lightly caricatured Village finale which yet ends in a glorious blaze. That same finale from time to time reminded me of Sibelius’s Lemminkainen Suite recently issued in the elite mono 1950s version with Ormandy by Pristine (PASC 299).