The 1954 Decca recording of Walton's Façade is perhaps the closest thing we have to an authentic performance, not least thanks to the recitals from the author of the poems, Dame Edith Sitwell. Although Walton, an eternal fiddler and reviser of his works, was later to add further to his Façade numbers, the version here is the definitive version published with Sitwell in 1951, and unaltered until after her death.

If Decca's recording sounds just a little dim and dusty some 57 years later, this was easily lifted by an XR remastering which brings a new clarity and directness to these performances - they really burst into life!

The Boult recordings here are among the finest I've heard from the mono era - full-bodied, rich and deep (and I'm in danger here of describing a bottle of fine wine!), they're also bursting with vivacity and possess a fabulously clear top end. Pristine's 32-bit XR remastering has worked here on further definition of the fine inner detail, while leaving the overall impact of the original largely intact and unchanged.

XR remastering by Andrew Rose at Pristine Audio, May 2011
Cover artwork based on a photograph of Edith Sitwell 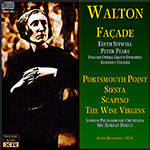 "It was time for a new edition of what is now seen by all ("even by the firemen" as Dame Edith would say) as much more than a highbrow jape. Façade, popularised by the ballet made from the music, is now accepted and has weathered the indifference which usually sits on once ultramodern manifestations for a space after they have passed into history. The truth is the music and the poetic experiment in the use of melodrama (in the strict sense of the word) are both of lasting value, quite apart from the nostalgic smiles they will bring to the now greying Bright Young Things of the twenties, and also the amazement which the voices of these two intensely English narrators will occasion in the ladies' clubs of Maryland and the cultural unions of New South Wales. For that alone, for these examples of poetic diction by Dr. Sitwell and Mr. Pears, of whom the lightest criticism would be lèse-majesté, but who happily for the reviewer earn no rebuke, this issue is to be prized.

The other reason why a new edition is welcome is that with modern full frequency recording it is at last possible really to balance the music and the voices so that the words get through clearly and one does in fact listen to sound and sense in both departments simultaneously. There were still a few places where I would have liked to have by me the pamphlet of words priced at 9d. and obtainable from the Decca Company, but generally the texture is beautifully clear.

As in the older version, the author shares the narration: here it is Mr. Pears instead of the late Constant Lambert ; where the latter was inclined to shout, the former is inclined to sound nasal, even "coldified". Dame Edith's interpretation of her own It paterns " [sic. - from Gramophone's scans] of poetry which on the record's sleeve she compares with the transcendental studies in pianism by Liszt remains unique. No disappointment in any respect."

Edith Sitwell began publishing the poems that make up the collection that was eventually called Façade shortly after World War I. For a while, William Walton was sharing a house with the Sitwell family and someone thought of adding music to some of the poems. The eventual result was that 21 of Sitwell’s poems ended up with musical accompaniments by Walton. After Sitwell’s death, Walton produced accompaniments to several of the poems that had been dropped between the 1922 private performance and the publication of the definitive score in 1951. This particular recording, like other “complete” ones, consists of the 21 poems that made the cut, so to speak. It was previously issued on CD a few years ago on the Alto label in very good transfers. The Eloquence reissue is of comparable quality and, because it is authorized by Decca, includes Sitwell’s original annotations for the 1954 LP. What it does not have are the texts of the poems, which were also provided with the original LP. Let me point out that you don’t really have to understand the words in order to enjoy the piece. The meaning of the poems is much less important than the sheer sound of the words; Sitwell treats the narrators as extra instrumentalists. Perhaps people who acquire this release will already own a recording that includes the texts. The narration is sometimes performed by a single speaker, but the first (incomplete) recording, which was conducted by Walton in 1929, used two speakers, Constant Lambert and Sitwell herself (she read four of the poems). I admire this 1954 Façade a great deal (Peter Pears does a virtuoso turn rattling off some of Sitwell’s nonsense), but my all-time favorite recording featured Hermione Gingold and Russell Oberlin with Thomas Dunn conducting. I suppose everything comes out again sooner or later, so I have hopes that it will finally make it to CD.

Here’s yet another excellent transfer of the Collins recording that you would not go wrong with. The three shorter pieces had been previously released in an excellent Decca Eloquence CD collection with works by Bax and Bliss. The Scapino Overture was written for the 50th anniversary of the Chicago Symphony Orchestra and recorded shortly after the premiere with Frederick Stock conducting. In the event that you know the piece and manage to ever hear the pioneering Stock recording, you will notice some unfamiliar passages. Sure enough, Walton, as was his custom, continued to fuss over the music after it had been published. All the subsequent recordings use the revised edition, and Boult’s, single channel or not, is as good as any of them. The same can be said of his recordings of Siesta and the bustling Portsmouth Point Overture, which occupied the same LP as the Scapino Overture. The Portsmouth Point Overture was considered sufficiently tricky that, in 1932, Constant Lambert made an arrangement (presumably authorized) for reduced orchestra and simplified the multiple time signatures “which, in the original version, afforded a certain source of vexation to both orchestra and conductor,” as Lambert put it. If you’re curious, Bryden Thomson’s recording of Lambert’s edition is on Chandos 9148. In a previous issue, I expressed my disappointment that Decca Eloquence had not included the three pieces’ LP discmate, Boult’s stately but sufficiently spirited recording of The Wise Virgins ballet suite, all that survives from a Bach-derived score Walton wrote in 1940 for the Sadler’s Wells Ballet. Good for Pristine for returning it to circulation. I learned the piece on Walton’s 78s, which I thought suffered from what seemed to be an attempt to squeeze the piece onto four sides. Boult’s isn’t the only good one, and those who must have two channels have an excellent EMI alternative by Robert Irving. This would be my narrow choice over the Alto and Eloquence reissues, largely because of the inclusion of Boult’s Wise Virgins.