MOZART Sinfonia Concertante
HAYDN Symphony No. 91
MUSSORGSKY A Night on the Bare Mountain
plus other short works
Recorded in 1937 and 1938
Total duration: 62:16

Konoye is masterful with a superb Berlin Philharmonic

Konoye's earliest recordings were made with the New Symphony Orchestra of Tokyo for Japanese Parlophone starting in the 1920s. The most significant item from these sessions was a Mahler Fourth from 1930, the première recording of the work and the first complete electrical inscription of any Mahler symphony. The orchestra plays with a decidedly rough ensemble, and things are little better in a series of discs with a seemingly under-rehearsed La Scala Orchestra from 1931 which include a complete Beethoven First Symphony.

The present series of recordings was the first Konoye made with a world-class orchestra. His association with the Berlin Philharmonic dated back to 1924, and his conductorial studies under Muck and Kleiber solidified his links to Germany and its symphonic tradition.

The recording of the Mozart cuts the fifth variation in the finale to fit the work onto seven sides, although the eighth side in the set was left blank and the work could have been accommodated complete. The Haydn symphony was fit on six 10-inch sides by omitting most of the repeats. The anthems disc was presumably made to celebrate the Axis alliance between Germany and Japan. (The "Horst Wessel Lied" was routinely appended to the German national anthem during the Hitler era. Not surprisingly, these tracks have remained un-reissued in previous Konoye compilations.)

The sources for the transfers were laminated French Columbias for the Mozart and German Polydors for the Haydn symphony and the Mussorgsky. The rare anthems sides came from secondary sources provided by a Japanese collector.

Producer and Audio Restoration Engineer: Mark Obert-Thorn
Cover artwork based on a photograph of Hidemaro Konoye 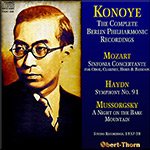 Purchase with confidence, in both interpretative and transfer senses

In terms of recording history Hidemaro Konoye is best known for his pioneering 1930 recording of Mahler’s Fourth Symphony, made in Tokyo for Japanese Parlophone. The seeming incongruity of this undertaking, and the West’s comparative ignorance of the Japanese recording industry, has conspired to grant this set a real, albeit unexpected cachet. But Konoye, or Viscount Konoye (1898-1973), was steeped in Austro-German music. He’d first studied in Germany four years after Mahler’s death, then returned to Europe in 1923, studying with a raft of big names – composition with d’Indy and Schreker, and conducting with Erich Kleiber and Karl Muck. Konoye founded the New Symphony Orchestra of Tokyo, with whom he made the Mahler recording, but he also had an established relationship with the Berlin Philharmonic, which he first directed in 1924. Thirteen years later he began a small series of recordings with them, all presented in this disc.

Mozart’s Sinfonia Concertante grants solo space to four leading Berlin principals: Erich Venzke (oboe), Alfred Bürkner (clarinet), Martin Ziller (horn) and Oskar Rothensteiner (bassoon). All four play with personable wit, and whilst they are perhaps less richly individual than the soloists on Stokowski’s near contemporaneous Philadelphia recording – Marcel Tabuteau, Bernard Portnoy, Mason Jones and Sol Schoenbach were the illustrious names in that set – some may prefer Konoye’s more discreet handling of the orchestral fabric. He encourages some warm slides in the opening introduction and throughout, but otherwise adopts a ‘let them play’ approach that works well, not least in the bucolic finale.

Haydn’s Symphony No.91 was well chosen for recording purposes. Not only is it compact but I’m not aware of any contender in the late 30s. The Polydors used for transfer are rather more crackly than the Columbias used for the Mozart, but once again side joins are imperceptible and the sound spectrum is excellent. Konoye proves to be a rather impressive Classicist, imbuing the music with a nicely characterised quality, and pomposo when required.

Mussorgsky’s A Night on the Bare Mountain managed to fit onto two sides of a Polydor 78, and it’s tautly argued and quite driven. The remainder of the disc offers a slice of political life. There’s the German National Anthem, coupled on the same side with the Horst Wessel Lied, and on the reverse the Japanese National Anthem in Konoye’s own arrangement. For obvious reasons these recordings haven’t seen much currency since the War.

This disc houses the complete Konoye Berlin recordings, in fine transfers. If you’re curious, you can purchase with confidence, in both interpretative and transfer senses.