Coupled with his live Don Juan from the same year

The recording here has often been used to "complete" Mengelberg's 1940 Beethoven cycle, which otherwise consists of recordings made by Dutch radio from live concert broadcasts - the source of the recording here of Don Juan.

However, this recording of the Eroica Symphony was actually made as a studio recording and issued on German Telefunken 78s, and as such I've distanced it slightly from our series of 1940 live Beethoven recordings. Although the sound quality is excellent for 78s of this era, especially following XR remastering, it lacks the clarity, a product of a particularly wide frequency and dynamic range, achieved on the glass acetates used by AVRO's radio engineers when preserving their broadcasts.

The Beethoven discs showed large differences in both high treble and background noise between the starts and ends of each side, and much work was required to try to retain as much of the former whilst reducing as much of the latter and providing smooth side changes. By contrast the Strauss was a much more straightforward affair, with the main task being reduction of swish.

XR remastering by Andrew Rose at Pristine Audio, April 2011
Cover artwork based on a photograph of Willem Mengelberg 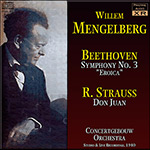 If you have any affection for great historic performances, this disc is an indispensable acquisition

With this release Andrew Rose of Pristine Audio finishes his reissue of Mengelberg’s cycle of the Beethoven symphonies. (For those who favor downloads rather than buying CDs, the entire cycle is now available from pristineclassical.com at a reduced price for the complete set.) As usual—there has been the rare exception, an “XR stereo” version of Toscanini’s 1947 performance of Verdi’s Otello that made the voices well-nigh unrecognizable—Rose triumphs with a remastering from near-mint Philips LPs that easily surpasses all previous versions for sonic breadth, depth, and clarity. In this case part of the material was particularly intractable; as Mengelberg collectors know, the surviving broadcast performance from November 11, 1940, of the “Eroica” suffers from such bad distortion that Philips (and virtually everyone else) uses this 1940 Telefunken studio recording instead to fill in the cycle despite the decidedly flat, dry acoustic of the 78s. Even with the result that Rose achieves here, I personally think that the discreet addition of some extra reverberation for warmth would have improved the sound still further; as it is, listening to it continuously still remains somewhat aurally fatiguing.

Aural fatigue is not a term that applies to the interpretation, however. In his reviews of previous CD issues of this performance, James H. North, Fanfare’s resident Mengelberg authority, seems to have shifted his estimation of it considerably over the years. Back in 1994 (17: 6) he opined that it “is as flaky a performance as the Dutch conductor ever gave. In three of the four movements, tempos vary wildly from much too fast to rather slow. The Scherzo and Trio have no repeats and some absurdly fast tempos.” But in 2000 (23:5) he wrote, “This studio recording has imagination, superb playing, and fine sound. Tempos are generally faster than in 1930; the very rapid finale suffers some loss of coherence. There are many cases of the rhythmic adjustments that are part and parcel of this conductor’s essence.” I agree with his later rather than earlier opinion, save that I find no loss of coherence in the finale. This performance of the “Eroica” will startle those unfamiliar with it, but familiar with Mengelberg’s reputation as a hyper-Romantic conductor. It is taut, lean, swift, and electric, in the mode of Toscanini and Weingartner—the timings of the four movements are 14:22, 15:56, 4:01, and 11:14—and the trademark fluctuations in tempi and use of rubato are fewer and more subtle and economical than one often encounters from this flying Dutchman. Given that my favorite “Eroica” at present is the 1952 RIAS broadcast with Furtwängler and the Berlin Philharmonic (with movement timings of 16: 37, 18:55, 6:37, and 12:57), I was surprised at just how taken I was with this antipodal interpretation.

The Don Juan is another matter. The oft-refurbished and fabled 1938 Telefunken studio recording has received multiple encomiums in these pages from North (21:6 and 23:5), William Zagorski (27:5), and Mortimer H. Frank (24:2, Want List for 2000). Here we have instead the live performance from a month after the studio “Eroica” recording. North believes the studio recording to be the superior version; it may be Rose’s auditory sorcery at work (and let’s hope he remasters the 1938 performance as well), but for me this 1940 performance is easily superior. The sound is far warmer and more natural—the Telefunken 78s here still suffer from a certain dry deadness, if not to the same degree as in the “Eroica” recording—and instrumental details of solo instruments such as the glockenspiel and harp are astonishingly vivid. In the 1938 recording the solo violin sounds a bit wiry at its first entrance, with intonation not quite centered, here in 1940 it is incredibly lush, suave, and seductive. I also find this performance to have a more continuous lyrical flow than its studio predecessor.

So, as Emperor Joseph II is made to say repeatedly to Mozart in Peter Shaffer’s Amadeus, “Well, there it is.” If you have any affection for great historic performances, this disc is an indispensable acquisition, and no more need be said.