Long's two Ravel Concertos - and the Milhaud - plus Debussy

A cornucopia of composer-performer collaboration in new XR remasters

The first recording of Ravel's Piano Concerto in G, allegedly with the composer conducting, took place exactly three months after its première in Paris - which he did conduct, and where most of the rest of the program had been conducted by de Freitas Branco. It is the latter who conducts the 1932 recording here, despite continued and repeated billing both by HMV and EMI, and more recently other labels, of Ravel himself.

It does seem far more likely that, by contrast, it is the composer who conducts Milhaud's Piano Concerto here - as with Ravel, and also Debussy, Fauré and other French composers of the era, Marguerite Long had a close and fruitful working relationship with Darius Milhaud.

Naturally the 1920s and 30s recordings frequently betray their age sonically, though often - particularly in the Milhaud - we are treated to clear upper frequencies, particularly in the brass, which offer a brightness which, if occasionally a little harsh, suggests a far more recent recording. The Ravel concerto - in its 1932 recording - suffered considerable swish, particularly during the quieter second movement, and a lot of effort has been expended in trying to reduce or eliminate this.

Naturally the 1952 recording of the concerto is of considerably higher fidelity - it was included here both to bring together Long's only studio recordings of the concerto, and also to offer the chance to contrast and compare the two quite different interpretations by someone who perhaps knew the both work and its composer's intentions better than any other pianist.

XR remastering by Andrew Rose at Pristine Audio, March - April 2011
Cover artwork based on a photograph of Marguerite Long 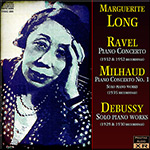 "Long made two recordings of the G major Concerto. The first one was recorded by Columbia on three 78 rpm records shortly after the January 1932 premiere. René Dumesnil reviewed it in Eve:

The recording of the Concerto pour piano by Maurice Ravel ... is quite worthy of the new work, whose success this winter in Paris, and later in all of Europe's capitals, was resounding. It is Mme. Marguerite Long, dedicatee of the Concerto, whom we hear again at the piano with the same delight as we did at the work's premiere. Her interpretation can be regarded as a model of intelligence, of finesse and of technical perfection. . . . And one must praise equally the orchestra under the direction of the composer.
[August 28, 1932.]

The recording was advertised as being conducted by Ravel, but that was not quite the truth. It was actually under the baton of Pedro de Freitas-Branco, who had conducted most of the program on January 14, 1932. But, Long insisted, Ravel was present in the recording booth during the whole session, which lasted well into the night. He attentively followed every minute, voicing his opinion over the smallest details, and demanding that the performers start over until he was completely satisfied. And in the early morning hours he finally was.

Twenty years later, in 1954 [sic], with the advent of long-playing records, Long recorded the G major Concerto again, with the Orchestre de la Société du Conservatoire under Georges Tzipine. On the flip-side was a new performance of Fauré's Ballade, conducted by André Cluytens. The 1954 Ravel recording was criticized by many for its stylistic looseness, particularly in the slow movement. At 80, Long chose a more sentimental rendition, as opposed to the classical sobriety of her earlier version. Whether a matter of taste or not, the later performance contradicted Ravel's intentions, as Long herself described them."

"In 1933, Milhaud set out to write his First Piano Concerto and asked Long to give its first performance and to be its dedicatee. His inscription on her score is typical of his tongue-in-cheek-wit: "Je dépose à vos pieds chère et sublime amie cette oeuvre que vous ferez vivre par vos mains admirables" (I leave at your feet, dear and sublime friend, this work, which you will bring alive with your admirable hands). Still in the heat of the success of Ravel's G major Concerto, Long accepted wholeheartedly. The première took place on November 25, 1934, with the Orchestre Pasdeloup under the direction of Albert Wolff. The November issue of Le Monde musicalacknowledged the event with some reserve:

The concert of Sunday, [November] 25, was a beautiful festival of French contemporary music. It opened with the Saudades do Brasil by Darius Milhaud, strongly perfumed with smells of the Brazilian forest, and continued with the first audition of a new Concerto for piano by the same author, dedicated in 1933 to Marguerite Long. Of rather small dimension, it gives the piano a place of honor. It is the piano which leads, plays with the themes, discreetly emphasized by the orchestra soloists. ... It pales, of course, next to the prodigious Concerto by Ravel, which, under Long's magic fingers met another triumph, but it is a valuable asset to the modern pianist's repertoire.

A second performance took place on January 19, 1935 at the Salle Rameau with Long as soloist. The program consisted of music by French composers, each conducting his own work: Milhaud, Ibert, Gaubert, Siohan, and Honegger. In 1938 [sic] the Milhaud Concerto was recorded by Columbia, this time under the direction of the composer. Two pieces for piano, "Paysandu" (from Saudades do Brasil) and "Alfama" (from l'Automne), complete the record. "

This enterprising release couples both of Marguerite Long’s recordings of the Ravel concerto. The earlier one has been widely available on many different labels, but the remake is a real rarity I’d never encountered before.

The virtues of the 1932 premiere recording (famously supervised—though not conducted, as once thought—by Ravel himself) are well known: Long’s objective style, cool and dry but with splendid snap and animation in the outer movements; and in the central Adagio, just the right kind of fine-tuned expression—a delicate give-and-take in the melody, and purposeful direction to the phrases. The orchestra is more of a mixed blessing; its sound and color (especially the winds) are ideal for the music, but the outer movements are plagued by serious rhythmic insecurity—the panicked scrambling of the cor anglais solo at rehearsal 4–2 in the first movement is all too symptomatic. Pristine’s transfer is much more vivid than previous ones I had on hand (EMI, Cascavelle, and Andante).

The Paris Conservatory Orchestra is much better in her 1952 remake with Georges Tzipine—still plenty of tangy French character, but without the near-chaos of their predecessors. On the debit side, Long herself is now comparatively tired- and careful-sounding, especially in the first movement (though still with good technical command). The biggest difference is in the Adagio, now much slower, more casual, indeed sentimentalized, with too much pedal. The finale is still effective, at much the same tempo as before. The recording is excellent.

Milhaud’s concerto, recorded with the composer in 1935, is dispatched with snap and spirit, though the music itself strikes me as so much inconsequential note-spinning. His solo piano works are much more attractive, and Long’s performances are piquant and richly colored.

Her Debussy (recorded 1929–30) is very impressive indeed, combining French sensibility with strikingly robust emotional engagement. Melodic lines are sharply etched, with a keenly animated sense of the dramatic life of phrases, and everywhere a wonderful variety of color, touch, and pedaling. Once again Pristine’s transfers easily surpass the competition (Cascavelle).