One of the greatest 'lost' musical talents of the 20th Century

Completing our series of Mewton-Wood recordings

Although we are lucky to have a handful of recordings which demonstrate the wonderful pianism of Noel Mewton-Wood, it is perhaps to be regretted that these are largely drawn from the LPs made by the Musical Masterpiece Society and its various offshoots. Often, particularly in the early days, rather poorly recorded, the company also kept costs down by simplifying cover designs and information (or lack of it) as well as cheaply pressing lightweight ten inch vinyl discs.

The fact that these two recordings also span the often 'difficult' years as new tape technology replaced established 78rpm disc-to-disc recording methods has created extra work for the modern restorer. Both recordings are lacking in the extreme top end, and the orchestral tone at the beginning of the Chopin leaves a great deal to be desired. Happily this is to a degree rectified as the work progresses, and would have been passable for 78rpm release. Both recordings suffer from a light amount of peak distortion, but this has generally been rendered as unobtrusive as possible. What does shine in both of these recordings is the superb piano playing and generally fine piano tone of Mewton-Wood, for which we can be most grateful!

XR remastering by Andrew Rose at Pristine Audio, March 2011
Cover artwork based on a photograph of Noel Mewton-Wood 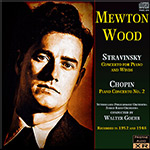 Notes on the Orchestra: The members of the so-called Netherlands Philharmonic Orchestra were drawn from the three Dutch radio orchestras of the day, something since confirmed by various orchestral members.

Mewton-Wood is a pianist who demands investigation

Occasional murmurings about the greatness of Noel Mewton-Wood (1922-1953), the Australian pianist who committed suicide at a tragically early age, swelled to an underground reputation when the British Music Society reissued his recording of the Bliss Piano Concerto (see review). I have to confess I had not investigated his art before now. A brutally truncated career can give rise to all sorts of legends and I have yet to be convinced that Dino Ciani, for example, was more than just a very good pianist. On the strength of this Chopin I’d say Mewton-Wood was among the greatest of recorded pianists, his early death a loss on a level with that of Lipatti or Kapell.

In Chopin his playing has great panache and passion, alternating effortlessly with moments of delicacy and of melting poetry. His tonal gradations and colouring in the gentler passages can be appreciated in spite of the problematic recording quality. His rubato is very free, yet without losing the rhythmic shape of the phrase. Similarly, his tempi change with a certain freedom but he never loses sight of the larger structure of the music. In this latter he is helped by the sympathetic direction of Walter Goehr. The Zurich orchestra is not always immaculate, but he invests the orchestral tuttis with unusual fire and warmth while giving Mewton-Wood full rein in piano-led episodes. Goehr seems entirely identified with the spirit of the pianist’s interpretation, he is not just accompanying. In some ways it could be said that Mewton-Wood was able to combine the old-style personalized approach with a more modern rigour.

One of the finest-ever performances of this work put on disc, then, so what about the recording?

Like most of Mewton-Wood’s recordings, it was made for the Musical Masterpiece Society, which notoriously cut economic corners. The technology was not of the best for its times and pressings were poor and noisy. This same performance can be downloaded freely from the site of M. René Gagnaux. Gagnaux has taken a special interest in the MMS and has also transferred Mewton-Wood’s recordings of Beethoven’s Fourth Concerto and the first two of Tchaikovsky. His catalogue of Walter Goehr recordings is extensive and fascinating.

Gagnaux tells us that he made his transfer by combining the best passages of two copies from his own collection and a third made available by another collector. There is a heavy surface swish throughout but the sound is vibrant and alive, the piano close and sometimes clattery in fortes, especially in the higher range, but warm and involving. The orchestra is also close, sometimes a bit confused but full and, again, involving. The oboes sound very acid, but the Suisse Romande oboes sounded similar so I suppose that’s how the Swiss liked them. All in all, the performance comes across convincingly.

Given that all this costs nothing but internet connection and a blank CD to burn it on, you may take the line that “if it’s free there must be something wrong with it”. So if you pay the far from exorbitant price for the Pristine transfer, what do you get?

First of all, Andrew Rose has succeeded in reducing the surface noise to virtually nothing. Even on headphones I detected no background. But can this be done without filtering out a good part of the music too? At the outset the orchestra is far duller, with the husky string sound typical of heavy noise reduction. The effect is almost that of a drastically cleaned up pre-electric recording. The piano, too, is duller, much of the light has gone from the sound. There’s also some wow at the beginning of the slow movement. The more delicate moments are attractive in a moonlit way, but the overall impression is that Mewton-Wood is playing an elderly upright piano rather than a grand. Both pianist and orchestra sound to be further away from us in this transfer, too. In the last resort the performance itself sounds less remarkable. So no contest, I’m afraid.

The Stravinsky was transferred as one of the fillers on the BMS Bliss disc – in the absence of other British repertoire set down by Mewton-Wood. I haven’t heard this.

The modern tendency is to treat Stravinsky’s neo-classical works with a certain dispassionate elegance. Stravinsky himself, as conductor, left no doubt that these works stemmed from the same volcanic personality as had penned “The Rite of Spring”. I am here talking of Stravinsky’s performances of his neo-classical works in general, I don’t know a Stravinsky-led version of the present piece. Mewton-Wood and Goehr provide real conviction and a blazing, barbaric splendour. Mewton-Wood’s tonal beauty emerges in the few passages – such as the beginning of the slow movement – where it is relevant.

Stravinsky was notoriously antipathetic to the idea that the performer was also an interpreter. Whether or not you agree with him where other composers than himself are concerned, his own music does not essentially require an “interpreter” the way Chopin does so this performance, excellent as it is, tells us rather less about Mewton-Wood. Any collector who takes my advice and downloads the Chopin in Gagnaux’s transfer needn’t regret the loss of the Stravinsky all that much, therefore. Those who buy the Pristine CD will note that in a patch of the slow movement the surface noise is so strong that Rose does not attempt to eliminate it. On the whole the sound is livelier here than in the Chopin.

I hope I’ve made it clear that Mewton-Wood is a pianist who demands investigation – but the present disc is not the place to begin.