The two recordings presented here were transferred from tapes donated to the Pristine Audio collection which, although they may be a generation or three away from the original disc recordings (I honestly don't know), have done a remarkably good job of preserving the fine detail captured by NBC's microphones in the late 1930s. If anything the later, 1939 recording is slightly sharper - it certainly presented fewer restoration problems, though hopefully no major differences will be heard in this release between the two.

In both recordings I have managed to find considerable clarity and range extension, and though the top end is occasionally marred by hiss and mild peak distortion, both the Concerto and Symphony sound remarkably fresh and alive in these transfers.

XR remastering by Andrew Rose at Pristine Audio, March 2011
Cover artwork based on a photograph of Arturo Toscanini 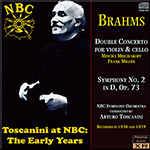 "...The Double Concerto provides a different situation, with the two NBC performances, both featuring the same first-desk soloists, contrasting markedly. As issued by RCA on LP, the second of the two broadcasts was almost unlistenable: shrill, thin, and painfully cramped. Transferred onto compact disc (and videocassette), the performance sounds far more musical: the shrillness has been eliminated, the orchestra has been given more weight, and the overall ambience seems less cramped. As a result, the musical virtues—veiled in the original LP— have become more apparent, notably the way in which tightly knit organization and a steady pulse underscore the work's suggestion, with opposition of paired soloists against larger tutti forces, of the concerto grosso style. Brahms, it should not be forgotten, was a first-class musicologist who had edited Handel (among others) and was thoroughly familiar with the baroque concerto idiom, as Toscanini's 1948 performance reminds us.

The 1939 broadcast comprises a considerably more improvisational reading, rhythms being less rigid and melodic lines lingered over more caressingly. None of this, however, violates good taste or the music's integrity. Indeed, it is a prime example of Toscanini's (and the soloists') command of rubato. In short, this is a performance that adds considerable dimension to Toscanini's Brahms."

"Of all the Brahms symphonies, the Second may pose the fewest interpretive problems. Not surprisingly, then, it is the Brahms symphony in which one encounters the fewest changes in approach from one Toscanini reading to another. The main differences among them center on the pacing for the finale: sometimes relatively expansive, as in the magnificent 1952 studio recording, other times swift. The 1938 broadcast features a blend of both approaches. And common to all of Toscanini's surviving accounts is his refusal to accelerate in the movement's coda, where the lullabylike second subject is transformed into a festive peroration for full orchestra.

As in the Brahms First, Toscanini's way with the Second Symphony is distinguished by a prevailing freedom from sentimentality. Neither of the first two movements is unduly protracted, and both benefit from an exceptional clarity of texture and firmness of pulse, with rubato, if often evident, subtly applied. In both movements surging dynamics and arching phrases suggest the ebb and flow of the sea that Brahms knew so well and that clearly influenced his music. And in all of Toscanini's performances the third movement is a model of unaffected, straightforward simplicity."

This performance alone makes this welcome release a required acquisition

So far as I know, neither of these performances has had previous release. Both are welcome and add dimension to Toscanini’s NBC years in the ways in which they diverge from his other surviving performances of each work. This broadcast of the symphony features the textural transparency typical of how the Maestro dispelled the once-held notion that Brahms’s orchestrations were “thick.” Moreover, it boasts a rhythmic give and take absent from his admirable 1952 RCA recording. This trait is most apparent in the work’s outer movements. Indeed, in the coda of the finale, one hears three distinct modifications of pulse, an effect that lends exceptional power and emphasis to the lead into and eruption of the triumphant return of the movement’s lullaby-like second subject. And in the first two movements Toscanini clarifies the influence of the sea upon Brahms, the music’s ebb and flow, calm and turbulence fully conveyed. Given that the finale in the studio account is broader than in any of Toscanini’s other surviving performances (all of his four NBC broadcasts and the one from his 1952 Brahms cycle with the Philharmonia Orchestra, Testament SBT 3167), this fleeter yet more rhythmically inflected 1938 account is especially welcome. Cramped 8H sound and intermittent graininess do not mask the fairly wide frequency response that lends the transfer a richness of timbre uncommon at the time.

Even more arresting is this 1939 “Double” Concerto. In every way it surpasses Toscanini’s 1948 televised NBC broadcast account that RCA released on LP, CD, and DVD. As longtime collectors may recall, the sound of the LP was infected with an unpleasant high-frequency emphasis. The CD rectified this blemish, and made the performance more than acceptable. But Pristine’s is far more commanding. The source suggests a very clean set of NBC “reference” discs having mainly silent surfaces and a frequency response far closer to that of a good monaural LP of the mid 1950s. Moreover, during this third NBC Symphony season, a revised microphone placement captured a hall resonance unattained during the two previous ones. As a result, the studio’s acoustics seem more suggestive of Carnegie Hall than of 8H. Most importantly, the entire performance is less driven, outer movements, in particular, gaining a chance to breathe yet never sounding stolid. Certainly Mischa Mischakoff and Frank Miller (both first-desk NBC musicians) benefit from this difference, their playing gaining greater clarity and expressivity than was possible in the 1948 account. For Toscanini’s admirers, this performance alone makes this welcome release a required acquisition.