Marvellous Schubert under the baton of Sir Hamilton Harty

The sources for the transfer of the concerto were primarily American Columbia "Full-Range" label pressings, with a patch from an earlier "Royal Blue" shellac copy to overcome the swish that most copies exhibit at the start of the first side. I have tried to correct the pitch fluctuations which plague the original recording. The ensemble is unknown, but may be the LSO, RPO, British SO, or a pickup combination thereof.

For the transfer of the symphony, I had the luxury of working from four American Columbia "Viva-Tonal" pressings, the most quiet form of issue for this set. An anomaly among other English Columbia recordings of the period, this one has hardly any pitch problems and plays at just about 78 rpm. The main problem here was overcoming blasting during loud passages caused by the original owners' use of fiber needles, for which the multiple copies came in handy. The original recording venue is unknown, but is definitely not the expansive acoustic of Free Trade Hall in Manchester, the Hallé's usual locale. Discographic expert Michael Gray believes it was likely done in Fyvie Hall, London, where Beecham had made recordings for Columbia the previous month. 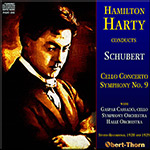 This is truly cause for rejoicing: a major symphonic recording by “the Irish Toscanini” Harty, hitherto one of the most gaping holes in the historic catalog, at long last available on CD, and in a transfer by Mark Obert-Thorn that does it full justice (a dry acoustic, but great presence and immediacy).

Harty’s “Great C Major” (Columbia, 1928) is a highly original conception (and along with a closely contemporaneous version from Leo Blech and the Berlin Philharmonic, one of the work’s earliest complete recordings). Typical of the Northern Irish maestro is its blend of freedom and discipline, rhythmic drive and Celtic rhapsody. His phrasing in the slow introduction is set in high relief, with tactile vividness. The Hallé Orchestra’s playing has incredible individuality: strings have a songful immediacy; winds an unblended “organ stop” reediness and pungency, with little use of vibrato. The tempo is very flexible, though Harty unusually does not aid the transition to the Allegro through an accelerando or any proportional relationship between the two tempos, instead abruptly changing to a completely different pulse, like a cinematic cut. The Allegro itself has tremendous brio, fire, and cut and thrust; no relaxation into the second theme, but a hugely flexible ebb and flow within it. The exposition’s climax (rehearsal G) really roars! At the end of the development, Harty’s handling of the twilit retransition to the recapitulation is wonderfully poetic, and in the coda, he subjects the return of the theme from the introduction to massive rhetorical elongation. His view of the Andante is dark and somber, moving at a measured pace that becomes a remorseless juggernaut. The lyrical second theme is shaped very vocally, with extraordinarily vivid dynamic molding. There is one cut (in the recapitulation, 6 before F to 9 after G), presumably in the interest of saving an extra side, at Harty’s expansive tempo. The Scherzo is taken very fast with a larger-than-life Schwung. Harty had an amazing ability to shape the melodic line of an entire string section with soloistic individuality—listen to the almost operatic treatment of the violins’ tune at rehearsal A + 2. The Trio has a full-throated intensity, and Harty’s volatile accelerando in the second half will certainly raise eyebrows—no danger here of Schubert’s “heavenly lengths” outstaying their welcome! The finale has both sharp rhythmic point and great flexibility of pacing, with compellingly plastic phrase-shaping through the long spans of the second theme (Harty started his musical career as an accompanist, and as a conductor possessed an exceptional ear for animating an accompanimental texture—listen to the dramatic crescendos with which he enlivens the “walking” cello/bass quarter-notes, rehearsal C + 7 ff.). He begins the development molto meno mosso, gradually regaining the main tempo during its course. The coda is likewise played with an improvisatory-sounding freedom of tempo—indeed, more than you would imagine anyone could possibly bring off, but in Harty’s hands the whole thing grips like a vise. Altogether this is like no other performance in the work’s recorded history. Comparisons would be pointless; it bears little resemblance to other 78-era recordings with British orchestras—neither the classical rigor of Boult/BBC SO (1934, HMV/Beulah) nor the romantic sensibility of Walter/London SO (1938, HMV/ASV Living Era).

The filler (1929) is inconsequential. Gaspar Cassadó didn’t stop at orchestrating Schubert’s Arpeggione Sonata; it’s a radical recomposition, with virtuoso cadenza-interpolations and the replacement of much of Schubert’s original by passages of Cassadó’s own devising—conventional hackwork filler marking time between the big tunes. On its original release this preposterous kitsch was billed as “Schubert’s Cello Concerto”! For what it’s worth, Cassadó’s playing is technically more secure here than in his 1950s remake for Vox, and Obert-Thorn’s transfer infinitely superior to the ridiculously over-filtered, dead-on-arrival travesty that appeared on Hallé’s own label some years ago. For the main work, though, this is one of the most important historical releases for a long time. Now, Pristine, how about Harty’s Beethoven Fourth?