Weingartner's Brahms offers a direct link back to the composer

Tremendous improvements in sonics in these new XR remasters

These recordings have been particularly tricky to remaster and restore, a process which has taken me, on and off, over three months to complete. They showed great promise from the outset, but time and time again I came up against the unfortunate fact that the very frequency range - the upper treble range above the "standard" 78rpm replay frequencies - which offered so much potential to help open out the sound were also plagued by the greatest and most unpleasantly scratchy surface noise. Despite trying multiple sources I kept coming back to this same problem until finally I was happy with what I'd achieved in being able to largely eliminate this noise whilst retaining as much information as possible.

The ultimate result is a happy one - a greatly extended and far more natural range of frequencies, both at the bass and at the treble end, coupled with a generally very clean background. The constricted and often muffled sound which has plagued previous issues is now mercifully a thing of the past and these marvellous recordings can now be enjoyed in sound much closer to how Weingartner himself must have heard them.

XR remastering by Andrew Rose at Pristine Audio, November 2010-March 2011
Cover artwork based on a photograph of Felix Weingartner 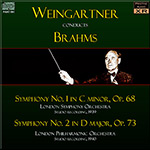 These performances will leave you limp and exhausted, they are so adrenalin-filled

I begin with the assumption that these are the same performances from 1939 and 1940 that were originally issued in the U.K. on Columbia 78s and that have been long available on CD in EMI’s “References” series of recordings. Once again, Bob [sic] Rose, Pristine’s audio engineering maître, has gone back to the 78 matrices and restored them using his proprietary “XR” process in an effort to extract more signal and cleaner results. Whatever he has done, it’s nothing short of miraculous. You would simply not know you were listening to recordings of this vintage taken from 78s. So, it’s entirely unnecessary to issue any kind of a warning about the quality of the sound, as one often must for remastered historical recordings. If Weingartner (1863–1942) conducting Brahms interests you, there is no reason to hesitate.

And Weingartner conducting Brahms should interest you because he is a direct link to the composer and the performing traditions of the time. Early on, while Brahms was still alive, Weingartner became assistant conductor to von Bülow in Hamburg. It was not a comfortable relationship. Von Bülow was a great champion of Brahms, as well as of Wagner and Tchaikovsky, but his conducting style was not to everyone’s taste, and his well-publicized tactless tongue got him into trouble more than once, as when he was fired from his position in Hanover for calling the tenor who was singing the Knight of the Swan in Lohengrin the Knight of the Swine.

From letters and anecdotal sources, it appears that Brahms more often than not preferred the stricter conducting manner of Hans Richter, who attended closely to the letter of the score, to that of von Bülow, who allowed himself a good deal of interpretive freedom. In these two 19th-century giants, one can see the antipodal antecedents that manifested themselves in the 20th-century rift between the Furtwängler (von Bülow) and Toscanini (Richter) schools, Richter being the one to declare that tempo fluctuations should be so discrete that only a metronome would detect them.

But all was not black and white. Brahms had his moods, one day calling Richter’s performances of his works “dull, gray, uninspired, and misunderstood,” while praising von Bülow’s readings in one breath and criticizing them in the next as “calculated for effects.” Significant in all of this, however, is that Brahms heard Richter’s successor, Felix Weingartner, conduct his Second Symphony and praised the young man as a “healthy, fresh personality who gave a truly wonderful performance.” And as far as I know, Weingartner is only one of two conductors who knew Brahms personally and recorded the composer’s works, the other being Max Fiedler (1859–1939).

From the recording at hand, it’s instantly clear that Weingartner rejected whatever he may have learned from his apprenticeship under von Bülow, choosing instead to follow in Richter’s path. The Un poco sostenuto that opens the First Symphony is taken fast and in absolutely strict time. There are no rhetorical flourishes, no stretching of the beat for the oboe solo, and no hair-pinning of dynamics. Yet for all its seeming rigidity, it builds up an enormous sense of expectation for the ensuing Allegro. The transition is seamless, the Allegro proceeding at a bracing pace and again with little to no flexibility in the beat, but a precision of articulation that many latter-day conductors fail to achieve. Something emerges from this that seldom registers in readings that are rhythmically pulled about, and that is the tremendous drama of agogic and metric conflict inherent in the confrontation between feuding rhythmic forces that Brahms has written into the score. Listen to the slashing chords marked pesante beginning in measure 60. The ferociousness of it is fearsome for the simple reason that Weingartner does exactly what Brahms asks for. Heretofore, I’ve held up Bruno Walter’s New York Philharmonic recording as an example of tempos yesterday versus today, citing his first-movement timing of 12:43 as faster than either Abaddo’s 1990 Berlin account at 14:13 or Rattle’s 2008 Berlin account at 13:59. Well, Walter, step aside; Weingartner is now the fastest gun in town at 11:46, and he will have you on the edge of your seat.

I note by the way that back in Fanfare 16:1, John Tuska submitted an earlier Brahms First by Weingartner to Fanfare’s Hall of Fame. That performance from 1929 was with the Royal Philharmonic, and I think it’s instructive to read what Tuska had to say, for it corroborates 100 percent what I’ve been saying: “Weingartner’s [performance] has a classical reserve, a sense of inner balance, and, more, an almost aristocratic austerity that embodies an underlying rhythmic vigor that defines the line rather than sings it. Although they were stylistically dissimilar, these are qualities Weingartner did share with Toscanini prior to 1937. It is rare today to hear such rigorous articulation, so accustomed have we become to the darker shades of romanticism. Yet, I suspect that here we come closer to what the audience heard when Hans von Bülow declared this to be the ‘Tenth Symphony’ than what quite recently Roger Norrington provided in his presumably ‘authentic’ recreation.”

If the above has led you to believe Weingartner is cold or soulless, you need only turn to the second movement, played exactly as Brahms wrote it and as lovingly as one can imagine it. When it comes time for the Adagio introduction to the last movement, there’s no aimless slogging through a gaseous bog. It marches in indomitable lockstep through the long night, inexorably toward the glorious sunrise. And what a sunrise the London Symphony brass provides! The famous tune that then kicks off the main body of the movement, taken at a quicker step than is customary, has a real sense of triumph and joy to it, as Weingartner and the orchestra keep up the pace and press on to a blazing finale. This now replaces Walter’s Brahms First as my reference source. Phenomenal!

The performance of Brahms’s Second Symphony comes as somewhat of a corrective to the impression I may have conveyed that Weingartner is a speed demon. Tempo-wise, he’s still a shade faster than most, but not that you’d really notice without checking timings—at least, that is, until the two sections marked Presto ma non assai in the third movement where he takes off like the cartoon roadrunner being chased by a coyote. These are the only points in the entire symphony, however, where Weingartner feels rushed to me, as if he simply chose to disregard the ma non assai caution sign.

In the first movement, he picks up no more than about a minute by not making a ritard, as so many conductors do, at the beginning of the second theme in the violas and cellos at measure 81 and its corresponding reappearance in the recapitulation. Again, he follows Brahms’s instructions scrupulously, for here the score is marked sempre dolce and cantando, but nowhere is there a ritard or meno mosso in sight. One could argue that sempre dolce and cantando, in and of themselves, implicitly call for a slowing, but Weingartner, as always, is a stickler for what’s in front of him on the page.

This, recall, is the symphony Brahms heard Weingartner conduct when he praised the young man as a “healthy, fresh personality who gave a truly wonderful performance.” As noted by Peter Clive in Brahms and his World, that performance took place in Vienna on April 3, 1895, but with the Berlin Philharmonic, not the Vienna Philharmonic. Whatever the orchestra, one has to know that if Weingartner led that performance anything like the one on this CD, it had to have been with a well-established, highly professional ensemble; no provincial band could possibly have played this way.

These performances will leave you limp and exhausted, they are so adrenalin-filled. But in closing, I just want to reiterate that you need have no fear of the vintage of these recordings. Bob Rose has breathed new life into them so that they sound almost brand new.