Mengelberg's Beethoven Symphonies:
"Hear them with new ears in these revelatory transfers" (Fanfare)

As with the other recordings in our series of Mengelberg's 1940 Beethoven cycle, these two live symphony performances were captured unusually well by the ARVO engineers on high quality glass acetate discs, and these recordings have responded especially well to Pristine Audio's XR remastering system. I have been able to tackle tonal deficiencies which in the originals manifested themselves in a rather hard, cramped acoustic characteristic of the microphones then in use. Fortunately almost all the frequencies required for true high fidelity had been recorded - the re-equalisation of the XR process merely rearranges them in volume a little to bring a far more natural tone to the orchestra.

From a restoration perspective, large swathes of the recordings were excellent, with just short sections where swish and low frequency bumps had to be eliminated, and the occasional side join tidied up. Both recordings are on a par with anything previously issued in this series with respect to sound quality, with the 7th Symphony perhaps showing the greater improvement over the original source.

XR remastering by Andrew Rose at Pristine Audio, February-March 2011
Cover artwork based on a photograph of Willem Mengelberg at the Concertgebouw 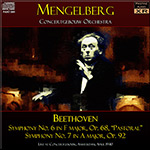 Mengelberg’s “Pastoral” was an incredibly radical conception for its time: light, lean, stripped-down, sharply focused. As always with Mengelberg (or nearly always), there’s a cogent musical rationale for the seeming eccentricities. If his way with the opening at first strikes us as dangerously indulgent, his point is precisely to detach the first four bars as a “frame” for the movement proper, before pouncing on bar 5 with up-tempo zest (Pletnev recently attempted the same thing, not very convincingly, in his erratic cycle with the Russian National Orchestra; among Mengelberg’s contemporaries, Mitropoulos was the only one to share his conception of the basic tempo, in his Minneapolis recording from the same year). Clarity and airiness are the watchwords—hear his radically detaché articulation of the second theme, and the incredible definition of the string figures in the closing section. The “Scene by the Brook” is taken as a real four-in-the-bar Andante, with a fluid flexibility of pace and vibrant fullness that he shared with Furtwängler, though accomplished within a faster basic pulse. More controversial is his eccentric rewriting of the rhythm in the main theme, resulting in a complex polyrhythmic effect—essentially superimposing a temporary 4/4 on the movement’s basic 12/8—that I have never understood the rationale for (he maintains it, though not with complete consistency, throughout the movement). Mengelberg’s “Storm” is one of the most amazingly vivid on record, deliberate and unhurried (Beethoven’s metronome mark is only 80 here, in contrast to the needless frenzy often whipped up) but with a headlong sweep, controlled ferocity, and subtly nuanced but pungently tangy coloristic range—sul ponticello string chills, sudden glints of brass tone through the downpour. The climax (bars 106 ff.) is overwhelming. The “Shepherd’s Hymn” has a (for its time) exhilarating up-tempo buoyancy and detached articulacy, with wonderful forward momentum in the coda, where so many conductors bog down. On the debit side, there are some fussy tempo changes (e.g., his disruptive slamming on of the brakes in bar 32); from the viewpoint of tempo modification, this is one case where Furtwängler’s more seamless, gradual approach was more convincing.

Mengelberg’s approach to the Seventh was equally original. The first movement is played for precision and weight at a moderate, flexible tempo. His Allegretto is like no one else’s in its heavily stylized clarity of legato/staccato articulation, and the contrasting major-mode section is a miracle of coloristic subtlety. The Scherzo is unhurried and trenchant; the Trio slow and songful, with much agogic manipulation. The finale is once again notable for its constant modification of the tempo, but here more in terms of a subtle flux than the abrupt gear-changes heard in the “Shepherd’s Hymn.” There is an extraordinary sense of each of the movement’s rhythmic elements leading its own autonomous life—e.g., the way he swings the swirling string lines against the massive, deliberate treatment of the wind-and-timpani punctuations. In comparison to alternative live versions (Mengelberg never made a studio recording of the Seventh), this one is notably slower overall, and more given to flexibility of rhetorical emphasis than those with the Concertgebouw in 1936 (Tahra) and Berlin Radio Orchestra in 1939 (on the British specialist Mengelberg label Archive Documents).