"Among the very best records he has made" - Gramophone

This is the third and final release in Pristine Audio's short series of stereo orchestral recordings made by the pianist Peter Katin for Decca and its subsidiaries in the mid-to-late 1950s, and features recordings from both his first and final stereo sessions at this time - there were no Decca recordings at all by Katin during the 1960s, and it was not until 1970 that he returned to the studio with Decca's engineers to make an LP of music by William Walton, with the composer conducting, for Lyrita.

In both of the present recordings I have adopted a very minimal approach to the remastering - to put it plainly, these Decca recordings were so good to begin with that I felt there was little that full XR remastering could manage to in any way improve them beyond lifting a slight veil at the top end.. I also used an undetectable second or two of convolution reverb to "assist" a rather clunky edit at the very end of the Grieg. Other than this my main duties were to eliminate any clicks from two superb pressings, reduce tape hiss levels slightly, and eliminate occasional very low frequency environmental rumble quite possibly caused by distant passing Underground trains being picked up by Decca's microphones during the recording sessions.

XR remastering by Andrew Rose at Pristine Audio, February-March 2011
Cover artwork based on a photograph of Peter Katin 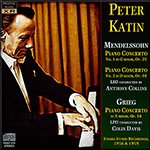 "Peter Katin's accounts of the two Mendelssohn concertos have always struck me as among the very best records he has made. They have a striking freshness to command them and in the slow movement of the G minor Concerto for example, just the right amount of poetic feeling. His refinement of tone colour excites admiration and his playing is distinguished by consistently good taste and judgement. The finale has sparkle and spontaneity though Mr Katin never allows his virtuosity to overstep the bounds of the period. These are in short very natural performances, well proportioned and polished, with the LSO under Anthony Collins providing admirable support. Both readings have stood the test of time well and the recording still sounds very good indeed with firm fresh-sounding piano tone truthful throughout its range and a well-focussed orchestral tone. The balance is good and the stereo quality is successful. Recommended."

Peter Katin’s Mendelssohn concertos have appeared on CD in London’s old Weekend series. The recording is typical early Decca stereo (1956), rather lean and astringent; comparing with the Weekend CD, I find Pristine’s transfers from LPs preferable in terms of added warmth, presence, and precision of imaging (hear, for instance, the realistic deep purr of the basses in the slow movement of No. 1).

The young Katin plays with an innate poise, lightness, and a classical scale of tone (silvery, even fortepiano-like) and expression that suits these concertos to a tee. At times the understatement may strike some as too much of a good thing—in the lyrical second theme from the first movement of No. 1 in G Minor, a slightly pallid impression, content to remain on the surface where others (Serkin/Ormandy, Columbia/Sony; Lympany/Sargent, Reader’s Digest/Ivory Classics) dig deeper, savoring the remarkable harmonic richness of the music’s surprising turn to D♭-Major. The filigree embellishments of the E-Major Andante have a delectable romantic sensibility.

In No. 2 in D Minor, the Mendelssohnian Strum und Drang of the opening Allegro appassionato is rather downplayed (for the other extreme, compare Serkin’s fearless plunge into the vortex). The Adagio is certainly beautiful, but also perhaps a little foursquare and placid. The D-Major finale is sheer delight, however, light as the proverbial thistledown.

Best of all is the Grieg from 1959, which is new to me. Again the silvery lightness to Katin’s sound strikes me as ideal for the music. But his playing seems to have acquired a more assertive edge in the intervening years since the Mendelssohn sessions; although the interpretation still emphasizes lyricism (truly exquisite delicacy in the Adagio and the songful second theme of the finale), it is now better balanced by a richly satisfying incisiveness and brio. The young Colin Davis’s conducting is memorable, too—sensitive, responsive, and fiery.

A minor classic, perhaps, but a classic nonetheless.