We are lucky to have any recordings whatsoever of Beecham in Seattle - union disputes precluded any commercial recordings during Beecham's time with the orchestra. To the best of our knowledge there remain three CDs-worth of live material, captured at the start of the 1943 season and preserved first on acetate discs (since melted down), then open-reel tape (since lost), backed up onto more open reel tape (now almost unplayable) and cassette tape. Thus the humble cassette proves the best remaining source of these historic recordings, and it is from excellent transfers of these, supplied by a collector who wishes to remain anonymous, that I have worked.

Since our first volume was issued, and the recording credited to a local radio station, further information has come to light which suggests that it was Beecham himself who commissioned the recordings in order to silence his critics locally. This probably accounts for a short section missing from the beginning of the third movement of the Beethoven, where a disc side change was apparently not achieved in good enough time. Other than that, and thanks largely to the preponderance of shorter works in this volume, the other works here are complete.

I have overall been particularly pleased with the sound quality achieved on this volume, with the Karelia Suite movement being a particularly good example of what was achieved in these recordings. It's also noticeable that, by comparison to the two previous issues in this series, the orchestra appears to be on much firmer ground and plays with considerably more style and accomplishment. If Sir Thomas Beecham had needed a compilation to demonstrate the abilities of his Seattle Symphony, then of the three volumes we have assembled this would surely be the one he would have chosen.

XR remastering by Andrew Rose at Pristine Audio, February-March 2011
Cover artwork based on a photograph of Sir Thomas Beecham 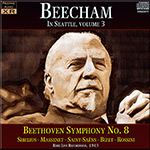 Will no doubt give pleasure to those who enjoy his work, particularly in live performances

Here is the third and final volume of Andrew Rose’s transfers of live material from Thomas Beecham’s final season in Seattle. Those who have acquired the first two CDs—and who, presumably, are Beecham fans—have no big surprises in store here. As Rose mentions in his producer’s note, the quality of the playing is somewhat stronger here than in earlier volumes, and the sound, while still fairly dim, is for the most part a bit of an improvement.

Beecham collectors will surely know that Sir Thomas recorded all these works in the studio, over half of them more than once. But, in his commercial recording of the Beethoven Eighth, for instance, the first movement doesn’t have the vigor of this reading, complete with Beecham’s audible exhortations to the orchestra. Uncharacteristically, Beecham does take the exposition repeat in this movement, something also true of the 1951 studio version. Despite the fact that, as Rose says, the orchestra is “on firmer ground” here than in the works on the first two volumes, the principal horn and clarinet players stumble in the notorious Trio of the Menuetto; also, the opening of this movement is missing, no doubt because the recordist was too slow in changing discs.

Beecham also provides a vocal obbligato in the Alla marcia from Sibelius’s Karelia Suite, which is very lively here, with a huge ritenuto at the end. The Valse triste is perhaps more languorous than the studio versions, the first of which was on a single 78 side and couldn’t be extended to the 5:11 duration of this reading. Saint-Saëns’s Le Rouet d’Omphale, like the Beethoven, betrays the lack of polish of the Seattle woodwinds. Rossini’s William Tell Overture features some fine solo cello playing at the opening and a spirited final section.

While this CD doesn’t add a great deal to our knowledge of Beecham, it will no doubt give pleasure to those who enjoy his work, particularly in live performances. With the caveat about the limited sound quality, and the missing bars of the Beethoven, it is recommended to them.