Peter Katin in superb virtuoso form for these piano classics

Fabulous stereo Decca recordings show why they were the best!

This release brings together recordings made by Decca both for the domestic British market and for its US label, Richmond, in the late 1950s. By this time Decca had been recording in stereo for half a decade and had thoroughly mastered the art, producing some of the highest quality recordings of the era. For these transfers I used later Decca pressings in excellent to near-mint condition, followed by my standard XR remastering techniques. It is a measure of how well the recordings were made that XR, often a very interventionist procedure, made only the slightest tweaks to the sound - something unlikely just a very few years earlier. The transfers were made at the request of Dr. Katin, and it is my pleasure to be able to present them both to him and to a wider audience. 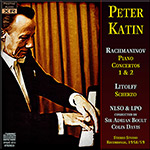