Obert-Thorn transfers of this almost-unknown conductor demand your attention!

Virtually nothing is known about conductor Alexander Kitschin, save for the fact that he was married to soprano Xenia Belmas (1889 - 1981), emigrated with her from the Soviet Union to Germany in 1921, and moved to South Africa with her in 1938. He accompanied her on a number of opera aria recordings made for Grammophon/Polydor in the late 1920s – and these three lone orchestral recordings. Kitschin’s interpretations appear to be in the tradition of such other colorful, highly individualistic Russian-born interpreters as Coates and Golovanov; and from the evidence presented here, he was clearly in their league.

The sources for the transfers presented here were German Polydor pressings. The cuts in the finale of the Tchaikovsky Fifth were not dictated by 78 rpm side lengths; indeed, the symphony ran to eleven sides, and a violin solo was added to fill out the album. The original discs were credited to “The Opera-Orchestra, Berlin”. WERM claims this is the Berlin-Charlottenburg Opera Orchestra, but the horn player in the second movement appears to be the same one featured in Leo Blech’s Berlin State Opera Orchestra recording of two years later (Pristine Audio PASC 181), albeit without the cracked note that mars his solo there. 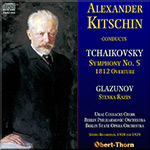 What is undeniable is the flair, excitement, and extremes generated by this unknown conductor

This is exciting. We have an almost unknown conductor, little known recordings, including a major symphonic statement, first class Polydor pressings, and splendid restorations by Mark Obert-Thorn.

The conductor is Alexander Kitschin, about whom almost nothing is known. He was married to soprano Xenia Belmas, and – I’m reliant on the brief notes for my information – he emigrated to Germany with her from the Soviet Union in 1921. They moved to South Africa in 1938. He accompanied her on some vocal discs in Berlin, as well as these three orchestral outings. All were made in Berlin, and even here there’s been some debate as to attribution. The Tchaikovsky Symphony is label-credited to ‘The Opera-Orchestra, Berlin’ but it’s been ascribed elsewhere to the Berlin-Charlottenburg Opera Orchestra. Obert-Thorn thinks it’s actually the Berlin State Opera Orchestra, who recorded the work two years later for Leo Blech, who ironically later trod the same journey as Kitschin, only in reverse, ending up in Russia.

Kitschin’s conducting ethos, on the basis of the symphony in particular, might be generally likened to such outsize individualists as Mengelberg, Coates, Stokowski, and Golovanov. In another twist, I assume he was living in South Africa at around the same time as Albert Coates, whose conducting his so resembles, so maybe some trace remains of him there, as some recorded traces do of Coates in broadcast performances.

I don’t think I’ve ever heard the Fifth open in such a way as here; a doleful, trudging, hugely introspective tempo, but one that is, amazingly, just about sustained through the opening paragraphs. Thenceforth we are treated to a remarkable display of personalised music making – powerful moments when the music stop-starts, slows down, speeds up. Rhythms are hugely flexible, and things are taken to phrasal and expressive limits. The slow movement is not especially slow in any way, but as throughout it’s the variety of phrasing and of orchestral colour that lends this performance its strategic purpose. He encourages distinctive wind playing and phrasing, and brings the orchestra along with him to a remarkable degree. There are cuts in the finale but these were, I think, not unusual at the time and even later conductors, such as Schmidt-Isserstedt and Sargent, used them. If you’ve had the good fortune to hear Coates’s 1922 traversal of the symphony you will certainly note a kind of kinship of interpretation. What is undeniable is the flair, excitement, and extremes generated by this unknown conductor.

As a bonus we have Glazunov’s Stenka Razin, in a purposeful, powerful traversal, and the ‘1812’, with the full-blooded contribution of the Ural Cossacks Choir.

These set the seal on a rather amazing disc.