Superb Brahms and Delius in these new XR transfers

Beecham "finds the sunlight and the vivacity in the work" - Gramophone, 1960

The two Brahms recordings, made in full stereo in 1956 and 1958, were taken from very clean later US pressings on the Seraphim label, and despite some minor vinyl surface inconsistencies the transfer was straightforward. XR remastering has succeeded in adding extra clarity and immediacy to the sound.

The earlier recording of Delius' North Country Sketches was made for 78rpm discs but onto tape in 1949., and this transfer was taken from a near-mint Philips white label test pressing for a later LP reissue. I was able to expand out considerably the top end of the frequency range, though this treatment did reveal some occasional treble inconsistencies in the tape which had to be rectified, as well as bringing up hiss levels slightly. I have attempted to strike a sensible balance between background hiss reduction and treble clarity.

XR remastering by Andrew Rose at Pristine Audio, December 2010
Cover artwork based on a photograph of Sir Thomas Beecham 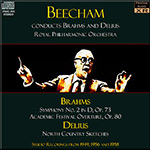 "A colleague of mine expressed surprise the other day that I was not more moved by Beecham's new record of Brahms 2. Well, here is a second chance, so I have taken it. In stereo the orchestral sound gains immensely; the strength and gleam of the R.P.O. violins high on the E string, the presence and vitality of the brass—the trombones, for example, at the stretto in the development of the first movement- and the total sonority, not so much in climaxes as when Brahms uses the greater part of his forces somewhere below the mezzo forte level: this is where stereo does justice to the skill of a Beecham performance. His treatment of rhythm and stress is something that gave pleasure in the mono version too; perhaps I left that to be taken for granted in my review last month.

Nevertheless, careful listening to a different recording of the same performance (as stereo is, compared with mono) doesn't change my total impression, which is that this is a fine performance rather than one that makes me think anew about the music. Beecham finds the sunlight and the vivacity in the work; one senses the play of a brilliant interpretative mind upon great music. What I do not feel is the effect of a looking-glass — the interpretative surface that receives and surrenders the essential image of the music. This isn't a performance that distorts, but nor is it one that reflects an inescapable truth. It reflects beauty, all right; and from this point of view I urge you to hear it, if you're contemplating the acquisition of the symphony. The new version sounds more vivid than the comparable Decca. In mono form, there are other performances that tell me more about the spirit of the music." W.S.M., Gramophone, July 1960

"...The Academic Festival Overture receives a rousing and enthusiastic performance, which is helped by the spacious recording acoustic and carefully controlled tempi..." D.S., Gramophone, April 1957

"There are four North Country Sketches, composed by Delius between 1913-14. i. Autumn, the wind soughs in the trees. 2. Winter landscape. 3. Dance. 4. The March of Spring. It should be noted that Autumn finishes on the first side of the Dance and so the listener should go back to Winter Landscape, complete on one side, before hearing the Dance. The March of Spring takes two sides.

The low soft undertones of autumn are succeeded by the wind soughing in the trees, with string basses and upper strings being extraordinarily well reproduced and the whole picture, exquisitely painted by Sir Thomas Beecham, being as evocative as only Delius can be. The oboe and horn tone (one little false entry may easily be forgiven) is most beautiful and the long drawn out end of the piece is among Delius' most lovely pages.

With great art Delius goes on to suggest the bare winter landscape, harp and oboe lending a certain icy glitter to the music and the massed violins suggesting the piercing cold. This is amazing scene painting and it is superbly brought to life by Sir Thomas. The Dance and the March of Spring are not musically quite on the same level: but I was fascinated by the chromatic up and down scales on the second side of the Dance and by the poetic treatment of the March, in which trumpets herald the coming of spring. It is not a criticism of the music to say that this piece brought to my mind one of the Nature films we too rarely see in which buds burst into flower before one's eyes. The end is not loud, but in the manner of the lyrical section of the violin concerto, with the familiar dotted rhythm a falling phrase.

I feel most grateful to the Delius Trust for giving us not only some more of the composer's beautiful music, but for putting in semi-permanent form another of the masterly and unique interpretations of Delius' works by Sir Thomas Beecham, who has inspired the orchestra to its finest playing." A.R., Gramophone, July 1951