First reissue of Ormandy's only recording of this superbly orchestrated score

Albéniz composed Iberia for solo piano between 1906 and 1909. At the urging of his friend, conductor and violinist Enrique Fernandez Arbós, the composer began to orchestrate the work, but died before making much progress. Ultimately, Arbós orchestrated five of the pieces, which he published in 1927. Composer/conductor Carlos Surinach published his orchestration of the remaining items in 1954.

American Columbia was slow to adopt stereo, and started to record in two channels only toward the end of 1956. As a result, the present set was only set down in monaural sound. It has never received an official CD reissue from Sony (nor, indeed, an LP reissue after the original album went out of print), and it remains the only recording Ormandy made of this colorful, virtuosic score. 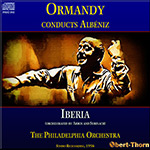 I went through the history of this orchestral showpiece a while back but, rather than direct you to a previous issue, I’ll do a brief rehash. Isaac Albéniz’s Iberia is a collection of a dozen piano pieces intended as evocations of various areas of (mostly southern) Spain. It is technically quite difficult to play but well worth the effort if you can manage it—Messiaen, who loved it, suggested that it might be the greatest collection of piano music ever written. It isn’t necessary to agree with him in order to appreciate Albéniz’s imagination and flair for the instrument. Realizing that the keyboard could barely encompass such a flood of notes, he accepted the suggestion that he should orchestrate it, but ill health and his eventual death at the age of 49 put an end to whatever efforts he may have made. He asked a friend, the conductor Enrique Fernández Arbós, to take on the task of putting Iberia in orchestral form. It does not appear that he had accomplished much even 15 years after the composer’s death. During the late 1920s, Ida Rubinstein asked Ravel for a Spanish piece that she could use as a vehicle for her dancing. Thinking of Iberia, Ravel wrote to Albéniz’s publisher and inquired about orchestrating some of the pieces. I have a suspicion that the mere fact that Ravel had expressed his interest spurred Arbós into action and, a year or so later, he issued not the entire Iberia, but a suite of five of the pieces, all but one from the first half of the complete work. Aside from its incompleteness, what Arbós did manage to do turned out to be a spectacular orchestral showpiece; as for Ravel, he wrote the Boléro for Rubinstein instead. Apparently frustrated by Arbós’s failure to orchestrate the entire work, descendants of Albéniz eventually asked the conductor/composer Carlos Surinach to finish he job, which he did, sometime in the mid 1950s. His orchestrations, if a bit spicier than those of Arbós, nevertheless fit quite comfortably with them. Surinach then recorded the seven pieces he had orchestrated for Montilla Records. The whole thing was then recorded by Eugene Ormandy and the Philadelphia Orchestra about six months before Columbia started recording stereophonically. This is truly unfortunate, for, given the splashy colors and vivid detail of the mono recording, one imagines how impressive the two-channel one might have been. It was reissued several years ago by Haydn House. I assume that the producer of this new Pristine reissue, Mark Obert-Thorn, has milked about all the decibels that can be gotten from the mono LPs. I was so fond of the two-disc LP set that I had two copies, just in case of damage, but, good as they were, they weren’t this impressive.

Iberia with Surinach’s completion was subsequently recorded in stereo by Jean Morel and the Paris Conservatory Orchestra (RCA) with a change in the order of a few movements. One appreciates the two channels but the performance, good as it is, lacks the power and energy of Ormandy’s and, in any case, has never been on CD and I wonder if it ever will be. Still available as of this writing is the 1997 Telarc set by Jesús López-Cobos and the Cincinnati Symphony Orchestra, not as dynamic and brilliant as Ormandy’s but usually a bit slower, relatively refined, and detailed—the sound really packs a wallop. For what it is, it’s quite good, indeed, but it’s on two CDs. Others have tried their luck orchestrating the music: Naxos has an orchestration by one Peter Breiner, which is good enough to at least compete with Arbós-Surinach. Sometimes his solutions are similar to theirs but there’s no reason to concede all the good effects to them, and there are even a few cases (Almaría and Jerez) where I prefer him to Surinach. On a few occasions, he adds the guitar, which I consider cheating, but it’s still a worthy effort and the conductor, Igor Golovschin, and the Moscow Symphony Orchestra perform the music fast enough to fit it on one CD. My original review is in Fanfare 24:5. The Spanish composer Francisco Guerrero embarked on a complete orchestration but apparently died before he could finish it. What he did do were six of the pieces. José Ramón Encinar leads the Galicia Symphony Orchestra on Glossa GSP 98006. There are, of course, quite a few recordings of the Arbós suite, sometimes including Navarra, an Iberia-like piece also orchestrated by Arbós. My favorite recording of this is Ernest Ansermet’s. Fritz Reiner recorded Navarra plus El corpus en Sevilla and Triana with the Chicago Symphony Orchestra in performances that frustrate with their brilliance, suggesting what they might have done with the rest of the music. In any event, I am delighted to have the comparable Ormandy/Philadelphia Orchestra virtuosity available even as I curse Columbia under my breath for dilly-dallying about stereo.