Superb sound and a fabulous performance

Furtwängler's first full recording of Bruckner's Seventh is a triumph

When it became known that I was working on a series of recordings of Furtwängler conducting Bruckner's symphonies, there was a certain degree of lobbying by e-mail for which recording might be chosen. I had already made considerable progress on the 1951 Cairo recording when I noticed repeated mentions both in e-mails and elsewhere referring to his 1949 Berlin recording as the one. Though not unanimous, it certainly made it worth investigating.

This is the earliest complete recording we have of Bruckner's Symphony No. 7 by Furtwängler. There is a fragmentary 1941 live recording, and the 1942 Telefunken studio recording of the Adagio (available on PASC257); thereafter two radio recordings from 1951, the first in Cairo, the second Rome, all with the Berlin Philharmonic, have seen numerous reissues.

But it is this recording and performance which is, for many, the best of them. Certainly from a technical point of view it's remarkably good. Despite a somewhat cramped and occasionally overly strident original sound, a product of uneven frequency responses in the recording equipment, all the ingredients were present for a really quite wonderful XR remastering - with deep, clear bass and brilliant top end detail preserved if previously obscured by a "woolly" sound at both ends of the spectrum.

That's not to say it was without fault. I've removed some quite intrusive traffic noise, and dealt with top end 'flutter' - where the signal levels fluctuate rapidly in the higher frequencies. This latter problem was particularly heard during the second movement, and it has been possible to eliminate almost all of it, though there is a section where it may still just be detected.

Overall, though, the sound is crsip, clear, immediate and vibrant - and as such delivers almost as well as the great conductor himself. 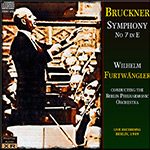