It is most unfortunate that no recording of the first movement of Furtwängler's performance of Bruckner's Symphony No. 6 survives, as for many aficionados, what remains of it in the second, third and fourth movements add up to one of the greatest performances ever captured for posterity. As with many of Furtwängler's finest live wartime recordings, the symphony was taped for radio rebroadcast. These tapes went east after the fall of the Nazi regime at the end of the war, only to re-emerge some years later on Russian Melodiya LP releases. It is a reasonable assumption that a tape of the missing movement once existed - but alas it has never been found and must be assumed permanently lost or destroyed.

It seemed a reasonable idea to group this incomplete recording with another - Furtwängler's only studio recording of music by Bruckner, made the previous year for release on Telefunken 78s. The recording, through no fault either of conductor or composer, has a certain notoriety by association - the movement was a particular favourite of Hitler's, and it was this recording that was broadcast on German radio following his death in 1945.

From a restorer's point of view, the Sixth has a little more going for it than the Seventh, thanks to the medium in which it has been preserved. Although magnetic tape was still very much in its infancy in the early 1940s, and microphones of the era were rather inadequate for the sonic opportunities it offered, it still managed to capture and hold a wider frequency and dynamic range than the wartime Telefunken shellac discs, allowing for a brighter overall sound - though it is interesting to hear subtle differences in sound quality between the movements of the 6th, raising possible questions about precisely when each was recorded. 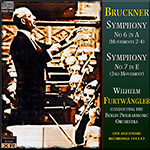