Of the live wartime recordings of Furtwängler that I have thus far tackled, this recording of Bruckner's Fifth Symphony, which dates among the earlier performances to be preserved on the then-nascent tape technology developed in Germany before and during the Second World War, has proved to be one of the best-preserved as well as best-made. Whereas other recordings are prone to overload distortion, amongst other flaws, the Bruckner Fifth is remarkably clean throughout. The chief shortcoming was a rather variable and unpredictable degree of high treble hiss and shash, which has responded better to manual control on a phrase-by-phrase basis than by using blanket noise reduction or equalisation. By working in this way I've been able to preserve some very impressively-extended upper frequencies, particularly as heard in the brass in the symphony's finale.

As with the other recordings in this series, I've spent considerable time eliminating or reducing audience noise, as well as various clicks, bangs and scrapes which appear to have emenated from the players themselves. Fortunately the magic of this particular performance appears to have captivated the audience to an extent that they were able to maintain their attention well and not succumb to too much bronchial activity during the quieter sections of the work - as is all too often the case. 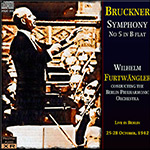