Astounding (and virtually cough-free!) sound quality in this XR remaster

My main aims with this recording were two-fold. First and foremost the sound, although clear for its age, suffered from quite a hard 'edge' and as a result a certain flatness or lack of dimension. I suspected rightly that this would be alleviated by XR remastering as it would almost certainly have been caused by an uneven frequency response in the recording equipment (most probably the microphone) rather than any shortcomings in the tape medium itself. Thus by correcting the frequency response as a part of the XR process I was able to solve this hardness, as well as extending the previously-constricted bottom end of the recording. The effect is to open out the whole recording and give a real sense of air and space around the instruments, something further experienced in our Ambient Stereo version.

The second issue anyone listening to this recording would surely have with it in its original form would be the almost constant intrusion from audience coughs and other noises. It seemed the good people of Stuttgart were having a particularly bronchial evening during this concert, especially during the quieter sections, and I've worked hard to either eliminate completely or reduce considerably hundreds of these unwanted interruptions. Unfortunately not all could be excised without risking damage to the musical content - thus you will not hear a completely cough-free performance, but certainly a much quieter audience than was actually the case on the night in question.

XR remastering by Andrew Rose at Pristine Audio, October-November 2010
Cover artwork based on a photograph of Furtwängler 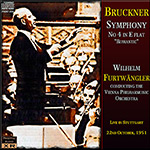