Coupled with his excellent 1953 'Unfinished' concert recording in Berlin

Having worked on Furtwänglers other two great wartime Berlin Ninth Symphony recordings, those of Beethoven and Bruckner, I was prompted to complete the set with his wonderful 1942 Schubert Ninth, a recording which was better made than the other two and which, apart from a tendency to top-end hiss during louder sections, offered more sonically than I had thus far achieved in this series. In fact, listen to the Ambient Stereo recording and you'll be hard pushed not to date this to some time in the 1950s or 1960s if you didn't know better, so good was the original and its response to XR remastering.

Once the restoration was complete I fished around for some other recording to add to the release; a number of shorter wartime recordings were considered but rejected on both sonic and artistic grounds, and my attention turned to his later Schubert recordings and most obviously the 'Unfinished' for reasons of duration. Eleven traumatic years later, and in the twilight of his career, we find the same magic still alive and well in concert, coupled with the sonic advances of the time. It seemed a fitting companion to the Ninth.

For an excellent article by Peter Gutmann on Furtwängler to be found online here, the following excerpt is particularly pertinent to the Schubert and other wartime recordings:

"Other than his own Symphonic Concerto and some snippets from Wagner operas, we seem to have no further live Furtwängler recordings until 1942 to 1944, when Radio Berlin taped twenty concerts. By then, Furtwängler's artistry had become completely transformed.

The pickup consisted of a principal microphone at the podium, mixed at the back of the hall with 3 others; all were omnidirectional and picked up a lot of audience noise. The sound was relayed by telephone line to Radio Berlin headquarters, where it was recorded on machines in 20 minute segments on 14 inch reels of iron oxide tape running at 30 inches per second. Although 49 pieces reportedly were recorded, many of the tapes were lost, damaged or erased for reuse. The survivors were removed by Soviet occupation forces. After generating decades of Russian LP bootlegs, 22 were returned to Berlin in 1987. Nineteen were issued on ten DGG CDs in 1989. Now out of print, many have emerged on the American Music & Arts label.

Admittedly, it is rather difficult to listen to them today, knowing that the recordings originally were made to boost combat morale and that the highly audible audience coughs arose from the pampered throats of Nazi military and government elite. But such perverse uses of art aside, perhaps we can take some comfort in Furtwängler's hope that these broadcasts would also bolster the courage and humanity of civilian listeners. In any event, our ears know little of political correctness; none of the performances is less than fascinating, and more than a few are among the most intense of all time.

If there is a single common quality to all of these performances, it is the extreme cohesion between conductor and orchestra, hard enough to find in standard readings but nearly impossible to achieve when the interpretation is impulsive and radically reconceived. This remarkable quality arose from the symbiosis between Furtwängler and the Berlin Philharmonic, whose mutual needs were both artistic and practical. The orchestra needed Furtwängler, without whose adoration by Hitler they would have lost their government subsidy and faced disbandment; indeed, the intensity of their playing has been ascribed to the fear that each performance might have been their last. And Furtwängler equally needed his players, his self-described "right arm," whose 20-year association enabled the musicians to understand and respond meaningfully to his bizarre gestures in a way that no other ensemble ever approached.

The magic bond is confirmed by both records and anecdotes. Wartime concerts have recently surfaced featuring Furtwängler conducting the Beethoven Symphony # 9 with the Stockholm Philharmonic (on Music & Arts CD-2002) and the Bruckner Symphony # 8 with the Vienna Philharmonic (on Music & Arts CD-764). Both works were Furtwängler specialties, but the readings lack even a hint of the gripping tension he regularly achieved with the Berlin Philharmonic. Also indicative of the Berlin players' unique understanding of their leader are the abundant tales from other orchestras, ranging from the Italian concertmaster who mistook Furtwängler's incomprehensible baton motions for nervousness and sought to reassure him, to the quip of a German musician that he knew when to start playing only by sitting down and counting to ten."

XR remastering by Andrew Rose at Pristine Audio, October 2010
Cover artwork based on a photograph of Furtwängler 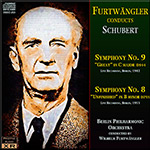