Furtwängler, Berlin 1944: among the greatest Bruckner 9's ever

There are two 9th Symphony recording made by Furtwängler in wartime Germany which stand out for their astounding musical excellence: the Beethoven 9th of 1942 (issued here a week before this as PASC250), and the Bruckner 9th of 1944. Both have, over the years, capture the hearts and minds of music lovers in spite of their poor sound quality.

So when we reissued the Beethoven following the transformation it received thanks to XR remastering, it was only to be expected that e-mails would start arriving asking for this Bruckner as well. Fortunately I had already anticipated the demand and work was well underway on the Bruckner, which has if anything survived the years considerably better than the Beethoven.

Here we finally have a Bruckner 9 from Furtwängler (his only known recording) which conveys the full majesty (one reviewer at Amazon calls it "the most "spiritually scary" Ninth I've ever heard, if not the most spiritually scary recording of ANYTHING that I've ever heard!") of the performance as perhaps never before. The sound is clear, exceptionally clean, full and well-rounded - the Ambient Stereo version might fool some listeners into imagining a good live recording from the 1960s rather than 1944. Only at points of absolute maximum volume do we get a hint of distortion, and then most of this I have been able to tame; there is also an occasion slight "fuzziness at the edges" during some sections which gives the age and provenance of the recording away, but again do not serve as more than the mildest very distraction and may even add something for some listeners as they feel the hairs on the backs of their necks standing up at the end of the first movement...

Performed live but without an audience, there are no coughs or other interruptions to distract the listener from what is surely one of the all-time great recordings of one of the greatest of conductors. In an article which discusses (among other things) the remarkable wartime recordings of Furtwängler, Peter Gutmann comments:

"But even these extraordinary achievements pale beside the miracle of the 1944 Bruckner Symphony # 9...

Furtwängler once said that "an interpreter can render only what he has first lived through." Of all the conductors who have grappled with the complex challenges of the Bruckner Ninth, Furtwängler was best positioned to understand what Bruckner had achieved. Bruno Walter had hinted at this when he observed that he never understood Bruckner until he became mortally ill. The Ninth is not a failed attempt at a cohesive artistic statement. Rather, it is a complete and perfect musical depiction of a tortured mind: a desperate snatch at a vision that grew ever more elusive, a vain quest for understanding and fulfillment in a world that would not provide it, a fevered groping for fragments of life in the lengthening shadow of death. As he wrestled with his Ninth Symphony, Bruckner stood at the very edge of that abyss. By late 1944, Furtwängler stood there too.

The first climax of the first movement heralds his emotion. The Berlin Philharmonic is fully controlled and its ensemble perfectly together, and yet the tempo is so unstable and dynamically alive that no note falls quite where its predecessors would suggest, as if to reflect the entire orchestra's heaving, nervous desperation. Furtwängler often spent entire rehearsals polishing crucial transitions, but not here; he chops the first movement into dozens of inconclusive fragments, deliberately wrenching the mood from lilting lyricism to raw savagery, the tempos from standstill to runaway, and dynamics from inaudible to heavily overloaded. The movement ends in screaming trumpets, a primordial burst of sheer abject terror as both Bruckner and Furtwängler confronted the most horrifying fear of all: that at the very end of their struggles there would be only a void.

Although nothing could eclipse the unparalleled power of the opening, the wonders of this radical reworking of the Bruckner Ninth do not end with the shattering climax of the first movement. Furtwängler whips the scherzo and trio from a slightly menacing waltz and bucolic pastorale into a furiously driven, vertiginous ride to damnation. He then gradually builds the unintended adagio finale to a terrifying dissonance, after which the exhausted fragments wither into eternal silence.

None of this is explicit in the score. It took Furtwängler to recognize and recreate an absolutely perfect depiction of a single mind and, by extension, an entire world on the brink of collapse."

XR remastering by Andrew Rose at Pristine Audio, October 2010
Cover artwork based on a photograph of Furtwängler 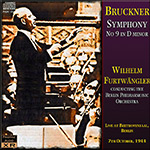