The infamous, astonishing performance in an outstanding sonic resurrection

The history of this recording is well known and takes us deep into one of the darkest eras of human history: Nazi Germany, the performances around the celebration of Hitler's birthday in March 1942, and a conductor who some saw as a collaborator, others an a naive tool of the regime, others still as someone who chose to oppose from within rather than leave Germany like so many other top-ranking musicians. The wider subject is covered in some depth in the further notes which accompany this release, and of course in much greater depth elsewhere.

It is pertinent to mention here, however, that many have come to see Furtwängler's Beethoven 9th Symphony of March 1942 as a kind of protest against Hitler and his henchmen, present for at least one of the performances that week. It has been hailed as one of the greatest and most powerful renditions of this momentous work ever captured by the miracle of recorded sound, as multiple five-star reviews on sites such as Amazon.com testify. Naturally it has seen numerous releases on different labels.

Each previous issue has, no doubt, attempted to deal with the rather poor quality of the original recording in one way or another, so why come back to in for another go? Well partly this has been due to requests received from those desperate for someone to crack the major sonic shortcomings of the recording, in the hope that XR remastering might achieve something where previous efforts have failed, and partly (as is often the case) through sheer curiosity on my part. I had been working on another performance by Furtwángler of the same work, and while I had the various elements of an XR restoration to hand curiosity got the better of me and I experimented with the 1942 Choral Symphony.

The results you'll hear in our lengthy sample on this page, comprising the full first movement. Despite some occasional fuzziness caused by peak distortion (much of which I've been able to tame considerably) during the loudest passages, the transformation has been exceptional, allowing the full power and impact of Furtwängler's vision to be experienced as perhaps never before (unless you had the "luck" to be in the hall at the time). Background hiss and noise has been reduced to near-silence, a number of audience coughs have been removed, and XR remastering has brought a fullness and depth of sound, matched by a new openness and clarity lacking in all previous issues.

Experience now one of the most powerful and charged music performances you'll ever hear - in a whole new sonic light. 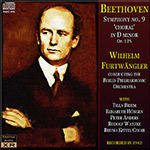 Each restoration engineer will have wanted to improve the sound quality of previous attempts. On this Pristine Audio release Andrew Rose in September and October 2010 carried out the XR re-mastering. Yes, there is still some occasional fuzziness; however, I was particularly impressed by the reduction in the background hiss. A number of the worst coughing episodes have been removed and much of the fierceness arising from peak distortion has been effectively smoothed away. The recording is vastly improved but it’s still not perfect. I make the appeal to try and listen through the sound quality because this is a truly great performance of real historic significance.

This 1942 Berlin performance has gained legendary status and is said to be an example of Furtwängler’s rebellious response to the stresses of working with the Berlin Philharmonic as cultural propagandists for Hitler’s Third Reich. Whether this is a true reflection of the situation or not this is certainly a heartfelt account of astonishing tension from Furtwängler’s tortured soul.

In the opening movement I was struck by the ferocity of the propulsive climaxes and the sense of torment and anger. The Scherzo is so powerful and brisk. That overt sense of incredible anguish unleashed in the fortissimos is practically demonic. Dark foreboding flows from the depths through the double-basses and cellos. It would be implausible that Furtwängler is doing anything other than venting his angst through this troubling music. An eerie sense of calm pervades the slow movement. The beautiful playing of the woodwind choir and the sonorous strings add to the poetic atmosphere. In the crowning finale with its famous choral setting of Schiller’s Ode to Joy the fury returns marked by the vehemence of the drums. Darkling intimations from the double-basses and cellos send a shiver down the spine. The entrance of the baritone soloist and Choir comes as a welcome relief. I found the singing ardently incisive throughout. At the close of the score the exultation is unalloyed.