Delightful recordings, both well-made and transferred from excellent sources, comprise this first release by Pristine of recordings by the eminent and highly talented William Steinberg, best known for his long tenure with the Pittsburgh Symphony Orchestra, which he transformed into one of the finest in the world at the time.

There is very little to comment with regard to the restoration and remastering process - everything went exceptionally smoothly, and aside from an occasional suggestion of end-of-side peak distortion in some of Strauss's cymbal-crashing moments, both halves of this somewhat diverse release have come up a treat!

Cover artwork based on a photograph of Steinberg with the Pittsburgh Symphony, c.1955
XR remastering by Andrew Rose at Pristine Audio, September 2010
Transfers by Edward Johnson from his private collection 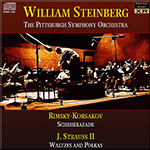 A warm welcome back for some vintage Steinberg, and highly recommended

Here is an exceedingly welcome reissue, filling some gaps left by EMI in its fine Steinberg/Capitol series of some years back. This 1955 Scheherazade is full of the familiar Steinberg virtues of integrity, superior musical values, and care over detail, but with no shortage of excitement, spontaneity, and individuality. His violin soloist is not identified in the printed (downloadable) documentation; he is (Samuel Thavlu) on Pristine’s website, but we shouldn’t have to go foraging online for this basic information.

“The Sea and Sinbad’s Ship” is shapely, sinuous, and subtle, with Steinberg displaying a marvelous ear for detail. His orchestral balance is characteristically lean, winds to the fore, and strings tight and focused. “The Story of the Kalendar Prince” is characterful, with wind solos of great artistry; “The Young Prince and Princess” cogent and focused, with string phrasing in long, graceful arcs. “Festival at Baghdad” is tight, superbly controlled, and excitingly built to the climactic return to “The Sea.” There are many classic Scheherazades from the 1950s, from the exhilaratingly elegant Classicism of van Beinum/Concertgebouw (Philips, 1956) to the mesmerizing Wagnerian drama and laser-like focus of Scherchen/Vienna State Opera Orchestra (Westminster, 1957), but Steinberg can take his place with the best of them. The recording is fairly dry, with what sounds like a little artificially added reverberation. Pristine’s transfer is well balanced with fine range and body but a rather grainy effect; quiet passages show some groove-wear distortion, but the ear soon adjusts.

The Strauss collection from 1953 sounds a little fresher. The performances are treasurable—zesty, refined, affectionate, and idiomatic waltzes; the polkas driven with real gusto and Schwung (though the Pizzicato and Annen in dubiously garish arrangements I’ve heard before but can’t identify; I could also do without the rather crass composed segue connection from Perpetuum Mobile [in E♭-Major] to Tritsch-Tratsch [D Major]).

Overall, a warm welcome back for some vintage Steinberg, and highly recommended.