Koussevitzky’s 1949 recording of the Tchaikovsky Fourth was the first made by the Boston Symphony using the new medium of magnetic tape. It was initially released on 78 and 45 rpm discs, the two formats favored by RCA Victor during the “speed wars”. After succumbing to the long playing format developed by Columbia, the performance was reissued on 33 1/3 rpm discs. However, as was the label’s custom at the time, its original “filler” side, the Serenade for Strings Waltz, was dropped from the LP release and not subsequently reissued.

Four months later, Koussevitzky and the BSO reassembled at Tanglewood to record the entire Serenade. Unlike the Symphony and the Waltz, which had previously been recorded by the conductor and ensemble in 1936, the Serenade was Koussevitzky’s first and only complete recording of the work. It is interesting to compare the drier, more detailed, but somewhat harsher sound RCA achieved here in comparison to the earlier Waltz recorded in Symphony Hall.

The sources for the transfer of the Symphony were the best portions of two late 1950s red “shaded dog” label pressings. The Waltz filler came from the 45 rpm set, and the Serenade was sourced from an early ‘50s plum “plain dog” LP. Longtime collectors may be familiar with several flaws in the original LP appearance of the Symphony, including a very noticeable join between the original Sides 1 and 2 in the first movement (RCA was still recording in four- to five-minute segments at this time), as well as sudden volume fluctuations in the first two movements. While I have been able to ameliorate these problems using digital editing techniques not available to the original engineers, I have been unable to undo the inherent compression that afflicts the louder passages of the performance.

Despite a HiFi/Stereo Review survey at the end of the 1950s that placed this recording of the Fourth Symphony at the top of an already-crowded field, RCA deleted the disc sometime around 1960, and has never reissued it in the subsequent half century. I am very pleased to be able to present it now for new generations to discover.

NB. An unpublished alternate take of the Waltz from this session was issued by BMG in 2001 on a compilation CD set. 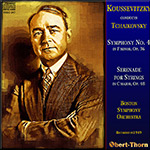 Obert-Thorn’s transfers are as expert as it gets. Another mandatory purchase from Pristine

These RCA sessions from 1949, near the end of Koussevitsky’s career, enshrine two of the greatest Tchaikovsky performances in the history of recording. Their neglect by RCA in the CD era is inexplicable (or rather an all-too-predictable reflection of the philistine cluelessness of the latter-day corporate descendants of such once-great record companies), and we are in Pristine’s debt for making them available again.

This is simply astounding music-making, in its combination of disciplined precision with extreme spontaneity and emotional generosity. That famous Koussevitsky Boston sonority—burnished mahogany, weighty and concentrated—was ideal for Tchaikovsky. The first movement of the symphony covers a huge range of tempo: a continuous controlled acceleration through the long main theme (bars 27–52—compare Furtwängler [VPO/EMI, 1951] and Mengelberg [Concertgebouw/Columbia, 1929] here, the former doggedly slow until an impulsive last-moment surge; the latter light and precise before a heavy rhetorical underlining of the cadence); later, an abrupt gearshift in the move to B Major (bar 134, in blatant disregard of the score’s injunction Ben sostenuto il tempo precedente—and listen to his extraordinarily vocal shaping of the violin phrases here); on the other hand, he maintains a fanatically strict tempo throughout the development section. Moments of extreme interpretive license are handled with such conviction as to completely disarm criticism, as in his hair-raising injection of a few seconds’ silence right before the climactic statement of the main theme in the coda (bar 402). The slow movement is measured and brooding, with dark velvet strings and pungent wind chording. The faster middle section is somber and anxious, quite a contrast with Monteux’s elegant cut and thrust here, in his RCA recording with the same orchestra 10 years later. Koussevitsky’s Scherzo is quite amazing in the vibrant fullness of sound and crackling intensity he draws from the massed pizzicato strings. The finale is measured, weighty, very Russian. A live version from the same year is faster and more excitable, but with the drawback of dim sound and an over-filtered transfer (Music & Arts).

The Serenade is every bit as compelling in its incredible panache and throwaway bravura, delivered with an iron rhythmic grip (outer movements); and in the Elegy, a sonorous vibrancy, tonal luster, and authentically Russian declamation, rising to rare heights of eloquence in the reprise of the main theme, with the tune in the violas against two independent countermelodies in the violins. This really is in a class of its own, other historic classics notwithstanding—Mengelberg’s radically detached, highly articulated neoclassicism (Concertgebouw, Telefunken, 1938/Biddulph); Mravinsky’s intimate, lyrical refinement (Leningrad Philharmonic, Melodiya, 1949; unfortunately laboring under an unattractively dried-out transfer on BMG); and Dobrowen’s propulsive dash and élan with the Philharmonia (HMV, 1947; recently issued in an excellent transfer by the small British label Historic Recordings, coupled with his equally engaging Fourth Symphony). The alternative version of the waltz was RCA’s filler for the original issue of the symphony; not surprisingly, the performance is nearly identical to the one in the complete recording of a few months later.

The original recording suffers from compression in parts of the first movement of the symphony, though this seems to improve in the course of the performance. But whatever the inherent shortcomings of the source, it pretty much goes without saying that Mark Obert-Thorn’s transfers are as expert as it gets. Another mandatory purchase from Pristine.