This penultimate concert of Cantelli's with the NBC Symphony Orchestra was rebroadcast some years later by the BBC and a high quality open reel tape of that broadcast has been my source here. As with many of their rebroadcasts, the original commentary has been lost here. However, the sound quality of the source I was thus able to work on was markedly superior to anything other that the original master tapes, and thus any contemporary broadcast recordings from the 1950s.

Naturally I was, from this starting point, able to make considerable inroads on sound quality – after all, the BBC was still dealing with 1950s originals, and it is rare that such material cannot be improved upon by modern remastering. What emerged here following XR remastering was a live Cantelli recording of unusually high sound quality, one which ranks among the very best I've heard. I leave discussion of the performance to Keith Bennett, who I must thank once more for providing the source - you can read his notes below. 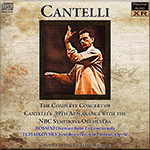 with the NBC Symphony Orchestra - 14 February 1954

This overture only came into Cantelli’s repertoire in 1953 and received his last performance in 1954. During that time he gave eight performances with five orchestras but this, his only performance with the NBC Symphony Orchestra, is the only one that has been preserved.After he had told Bicknell – the producer of several of his recordings for HMV – that he was to take over the helm at the Teatro alla Scala late in 1956 he indicated that he wished to record a number of short pieces with the Orchestra della Scala before then and Bicknell had already jotted down his initial thoughts for this recording in an undated hand-written note which included five Rossini overtures (La Cenerentola; Il signor Bruschino; La gazza ladra; L’italiana in Algeri and Semiramide) as well as Mascagni, some Verdi and Wolf-Ferrari. Unfortunately, the time could not be found for the recordings t take place in 1956 although there were tentative plans for recording in 1957. Sadly, it was not to be.

Cantelli had just four of Tchaikovsky’s compositions in his repertoire, the Fantasy Overture Romeo and Juliet and – as was customary at the time of his concert-giving – the last three symphonies. At about the time that Cantelli appeared on the international stage Tchaikovsky was usually interpreted in an emotional manner typified by the likes of Koussevitsky, Mengelberg and Stokowski – all great conductors, but whose style would not find favour today. That manner of interpretation was anathema to Cantelli (as it is to many of today’s record collectors) and he was generally more straightforward in his performances of the four of Tchaikovsky’s works in his repertoire.

Cantelli’s way was to purge them of any semblance of sentimentality by keeping a relatively firm grip on rhythm but this is not to say that rubato was banished entirely, merely that it was less in evidence than can be found in many of the more overt emotional performances. But what is accepted as the norm today, ie a closer approximation of the indications in the score, was like a breath of fresh air in the early 1950s. Cantelli’s recordings as recordings are not, of course, the equal of the vastly improved sonics which are to be heard in the latest stereo spectacular but listen to the young conductor’s musicianship and it is remarkable to hear how they equate with many of the superior sounding recordings currently to be found in the present catalogue and readers would do well to remember that probably around 100 recordings of Symphonies 4 and 5 have been available and even more (130?) of Symphony No.6, such is the popularity of these symphonies with the record-buying public.

Three of the six performances which Cantelli gave in the USA were broadcast although only the two which he gave with the NBC Symphony Orchestra have been appeared on CD (as at March 2008). While Cantelli did not subvert the music’s pulse for emotional impact he was more prone to accelerate towards climaxes in the 1949 performance (eg at bar 188 before the fanfare returns) which could be put down to youthful exuberance. In the fourth movement there is one curious unauthorized pause at Letter C and he adopts a slower tempo at Letter E neither of which he repeated in the later broadcast performances. Rehearsals for the 1949 performance have appeared on CD.

It is difficult to appreciate after more than 50 years just how strong an impression Cantelli’s way with this symphony – and in particular this performance – made on its listeners. This is what the very experienced American critic, Bernard Haggin, had to say in an article published in The Nation on 20 March 1954

I was especially grateful for the repetition of Tchaikovsky’s No.4 – the first in my forty years experience that gave me an accurate realization in sound what Tchaikovsky set down in his score, and one that showed him to be a better composer of his music than Stokowski, Koussevitsky, Mengelberg and all the others who have insisted on recomposing it for him.

Imagine, a skilled critic acknowledging that he had heard a performance which actually revealed what was in the score for the first time and Haggin must have heard the symphony many, many times. In a nutshell, that was what Cantelli achieved so often when he conducted music which had become distorted over the years by the pygmies (using Giulini’s assessment of conductors when compared with the real creative geniuses) and that is not to say that Cantelli did not take some liberties with the score, but his touches were less manipulative than those conductors which Haggin quotes.

The performance with the Philharmonic-Symphony Orchestra of New York on 30 January 1955 was the last time that Cantelli conducted this symphony and the somewhat warmer sonority of this orchestra will (if a CD ever appears) probably be considered more appropriate to Tchaikovsky’s score to either of the earlier performances with the NBC Symphony Orchestra.

It is one of his great achievements at NBC

This is the first CD release of this extraordinary performance, the only other release I know being on an LP in a limited-edition Toscanini Society set devoted to Cantelli. It is one of his great achievements at NBC, stronger and sonically superior to his only other account there—a 1950 performance issued in two CD sets devoted to him: Music & Arts 904, four CDs, and Testament SBT4 1306, four CDs. Not only is this Pristine disc superior to its LP predecessor, it surpasses many of NBC’s efforts in Carnegie Hall. To judge from the sound, the microphone was placed at a slightly greater than usual distance from the stage, providing a bit more “air” around the orchestra. With the exceptionally wide dynamic range of this release, this is about as realistic as Carnegie Hall recordings could be at the time, a realism that makes some of NBC’s efforts there for Toscanini seem comparatively cramped. And the performance is worthy of those efforts. Cantelli leads an account utterly free of mannerisms of any kind. Tempos are never distended, rhythm and pulse are free of distortion, and balances are gauged for maximum clarity. What it recalls (without duplicating) is the fine performance recorded for English Decca by Erich Kleiber (Testament SBT2 1352). In short, for those who care about Cantelli or the Tchaikovsky Fourth, this is a release not to be missed. Not to be ignored, the Rossini is a welcome bonus: equally well recorded, deliciously crisp, and just a tad broader than Toscanini rendered it. Certainly this release stands as another major achievement of Pristine’s Andrew Rose.