Casadesus is excellent in his only recorded Beethoven First

These two recordings are notable for a number of reasons. They were Eduard van Beinum's final studio recordings – within six weeks he was dead. The recording of the First Concerto is the only one Casadesus made, the recording of the Fourth is the second of two, and the only one in stereo (he had recorded it in December 1947 with Ormandy and the Philadelphia Orchestra, also for Columbia). They were reissued by Sony Classical on CD in 2002 but already copies are almost impossible to find, except at highly inflated prices – at the time of writing all three copies available through Amazon.com sellers are priced at over $70.

The disc I worked from was a Philips test pressing, barely played and in near-mint condition. Apart from some very mild (and easily rectified) surface swish at the beginning of side two it was as ideal a source as one could hope for from this era. What it did reveal (and I don't know whether this affected the Sony reissue) was a rather nasty tape dropout in the finale of the first movement, where the left hand channel was rather severely mangled for a second or to. Extensive repair work on this short section has improved things dramatically. XR remastering has lifted a veil from the top end, and I've also been able to reduce residual tape hiss to a considerable extent, especially on the Fourth Concerto. Overall they are excellent recordings – of excellent and rare performances from one of the great pianists of the 20th century.

All cadenzas by Robert Casadesus

Transfers by Andrew Rose from stereo test pressings for Philips LP SABL 118
XR remastering by Andrew Rose at Pristine Audio, September 2010
Cover artwork based on a photograph of Robert Casadesus 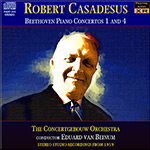 It’s a funny thing; I’ve had Robert Casadesus on the brain lately. A couple of recent releases of Mozart concertos performed by current pianists elicited recollections of a number of LPs I once had of Casadesus and Szell performing Mozart’s last half-dozen or so piano concertos, some with the Cleveland Orchestra, others with the Columbia Symphony Orchestra. Those LPs are long gone from my collection, and I never replaced them with their CD reincarnations, but I believe something more than simple nostalgia was at work in triggering my memory of those recordings. Casadesus and Szell, I think, had a special rapport with each other and with Mozart.

Pristine Audio, as readers will know from previous reviews, is a high-end audiophile enterprise dedicated to the remastering of older and in some cases historical recordings. The magic of the company’s XR process has been applied here to these 1959 studio stereo recordings with unbelievable results.

In approaching these readings, one must begin by setting aside prevailing notions about modern-performance practices, for in the years that have passed since these recordings were made attitudes have changed drastically with regard to how music of the 18th and early 19th centuries ought to be performed. Unless one takes that into account, these readings are bound to sound regressive. The first thing you will notice, for example, is the fairly deliberate tempo at which the first movement of the C-Major Concerto proceeds. There’s not much “brio” in this Beethoven “Allegro con … .” You will also notice a sense of earnestness, even perhaps solemnity, in the interpretational posture that says, “I’m Beethoven, and I’m important.”

But there are other things to note here as well. You will hear one of the world’s great orchestras in its prime under the baton of arguably its greatest conductor after Mengelberg, Eduard van Beinum. There’s a rhythmic exactness, almost of military precision, to the entrances and volleying exchanges between winds and brass, with all of the orchestral choirs dynamically balanced and perfectly in sync. It may be hard to believe, but I absolutely guarantee that you will hear in this 52-year-old recording the inner clockwork moving parts of this timepiece as you’ve never heard them, that’s how meticulous the playing is and how revealing Pristine’s restoration.

Now Casadesus makes his entrance, at first as unassuming and unpretentious as van Beinum’s exposition was confident and proud. It’s obvious that Casadesus sees Beethoven’s Piano Concerto No. 1 (actually his second in order of composition) as an extension of Mozart’s final essays in the form. Casadesus’s runs are strands of pearls and his passagework precisely weighted. The pianist plays his own cadenzas, which in the case of the First Concerto is a bit shorter and more modest than Beethoven’s own, but draws upon some of the composer’s familiar material and is eminently well-suited to the score. As for Casadesus’s cadenza to the Fourth Concerto, I’ll comment later.

Contrary to expectations, the second movement moves along at a pace rather more animated than the marked Largo. In fact, just for grins, I checked Casadesus against the recent Paul Lewis, and found that Casadesus is even faster than I thought—8:44 to Lewis’s 11:41. That’s an astonishing difference, but it further illustrates what I said above about the pianist seeing this early Beethoven concerto as having its roots in Mozart, for none of the slow movements in Mozart’s last eight concertos has a tempo marking any slower than Larghetto. Casadesus’s finale is filled with boisterous fun, proving he can hiccup and guffaw as well as anyone in this puckish movement.

If I’m a little less sanguine about van Beinum’s and Casadesus’s reading of the Fourth Concerto, it’s because I hold it apart from Beethoven’s other piano concertos not only as unique and the most extraordinary among them but as a work that, for me, has very special communicative powers. Therefore, I tend to seek in this score a feeling of radiance and rapture and a sense of the exalted. Till Fellner with Kent Nagano leading the Montreal Symphony Orchestra on an ECM recording captured those feelings, and deservedly made my 2010 Want List. The aforementioned Paul Lewis with Jiří Bělohlávek and the BBC Symphony Orchestra on Harmonia Mundi was a close runner-up.

If the first movement of the C-Major Concerto was on the slowish side, downplaying the “con brio,” the first movement of the G-Major Concerto is on the fast side, tending to ignore the “moderato” of Beethoven’s Allegro. The result sounds a bit perfunctory. Casadesus doesn’t stumble once in any of the movement’s tricky passagework, sounding nimble-fingered throughout, but the beautiful rippling effects, so different from the scales and arpeggios in the other concertos, and so much a part of the music’s ecstasy, tend to be sacrificed at the altar of virtuosic display.

As for Casadesus’s cadenza to the Fourth Concerto, fitting as it may be stylewise, it’s no proxy for the first of Beethoven’s own cadenzas. Nothing in my mind can substitute for those shocking 16th- and eighth-note chords in the left hand that cross the right hand in the concluding measures. The composer’s cadenza is such a bold, original stroke, I’m tempted to say that it ought to be considered as much a fixed and irreplaceable part of the score as is the cadenza in the “Emperor” Concerto.

In the second movement, Casadesus and van Beinum don’t quite see eye to eye, though technically Casadesus is probably closer to the mark. It’s customary—as it already was 52 years ago when this recording was made—to heighten the drama of this movement by taking it rather slower than Beethoven’s Andante con moto marking, sustaining the phrases and making the music sound foreboding. Van Beinum observes the tradition, beginning with portentously drawn-out gestures, the way I think we’re mostly accustomed to hearing it. Forget the “con moto”; it’s not even Andante. But as soon as Casadesus enters, you can feel him pressing forward. He wants to reestablish Beethoven’s original tempo marking. And so we have a bit of a tug-of-war going on here between the podium and the piano, with the conductor slowing down for each entrance and the pianist speeding up. In the end, it all comes out in the wash because as the movement progresses the entrances grow closer together until they finally converge, at which point agreement is reached. The concluding Rondo vivace is nicely done, except for Casadesus’s cadenza, which goes a bit bonkers toward the end.

While neither of these performances would be my first choice in these concertos, anyone harboring the slightest doubt about Casadesus’s artistry really needs to hear this release. And that brings me finally to the recording, a triumph of modern digital technology. If only Bob Rose of Pristine Audio could figure out a way to use his XR remastering technique to rejuvenate the aged, he’d be celebrated and sainted for discovering the fountain of youth. Whatever reservations I may have about these performances, I cannot bring myself to believe I am listening to recordings made over a half-century ago. But they were indeed transferred from stereo test pressings made for Philips LP SABL 118. Recommended then as both a tribute to a great pianist and an amazing audio experience.