Both of these albums were recorded in the mid-1950s using Mercury's famous single-microphone 'Living Presence' technique, which they were always keen to promote on their LP sleeves:

For Paul Paray this recorded performance of the Brahms Fourth Symphony with the Detroit Symphony Orchestra, the organization he has molded into a great body of musicians, has special significance; for with this disc, and those of the works of Wagner (Mercury MG50044, MG50021) and Beethoven (MG50045, MG50022), Mr. Paray feels he has achieved some proper representation on discs of his work as interpreter of the great classics of the German repertoire. Already critics and public in the U.S.A. and overseas have widely acclaimed Mr. Paray's immensely warm and vital readings of Beethoven and Wagner released earlier. The Mercury recording staff for its part has brought to bear every resource of its Living Presence single microphone recording technique in an effort to achieve a definitive realization of Mr. Paray's interpretive intent and the composer's music. The recording took place in Orchestra Hall, the original home of the Detroit Symphony Orchestra, on March 26, 1955, a single Tele-funken microphone being maintained in set position throughout with the orchestra seated in normal concert arrangement. Advance preparations were such that re-takes were kept to a minimum, thus insuring the maximum continuity of line throughout the whole of the music in its final recorded form. The entire gigantic finale is heard on this disc as one uninterrupted and unedited performance.

For those particularly interested in the sonic realization of this music through the medium of Living Presence recording, we call particular attention to the final pages of the slow movement beginning with the return of the secondary theme in the massed strings, as well as to the whole of the final movement in which brazen wind sonorities are placed in violent opposition to brilliant violin figuration.

It's interesting to note that, as with many other Mercury Living Presence LPs, the Brahms 'benefits' from a mild lift in the treble, peaking at around 3.5kHz. The fact that this is heard in badly exaggerated form on another Mercury Paray disc from the era leads me to conclude that this is a deliberate 'sweetening' of the sound by the recording engineers rather than a natural characteristic of the recording or the microphone used.

It is interesting that the earlier of the two LPs from which this release is derived shows no sign of either this lift nor the slight dip at about 1.25kHz that also seems to characterise something of the 'Living Presence' sound. Indeed the Wagner has a much more realistic tonal profile than any of the other LPs from which both this and our Paul Paray Conducts French Music (PASC240) release were drawn.

However, the 1953 recordings have slightly more tape hiss than the 1955 Brahms which, following XR remastering, turns out to be a remarkably clean and very well-balanced recording. Together with the Wagner they represent an excellent collection of recordings which have been unduly neglected by th e company which recorded them.

BRAHMS Symphony No. 4 in E minor, Op. 98
Recorded 26th March 1955
Issued as Mercury LP MG 50057
NB. This was Paray's only Mercury recording of any of Brahms's symphonies 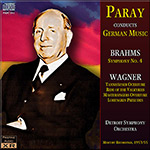 Paray’s Brahms Fourth is a performance to sit up and take notice of. I auditioned it just after reviewing a recording of the symphony led by Carl Schuricht, and the difference was night and day. If Schuricht emphasizes the non troppo side of Brahms’s Allegro, Paray practically ignores it. His tempo is fleet and his textures transparent. There is tremendous tension and drama in Paray’s reading, in part due to the cumulative power he achieves through a driving forward momentum, but also in large part due to the eruptive volcanic energy he unleashes in the swelling crescendos and clashing cross-rhythms. The early climactic passage beginning at around the one-minute mark is a good example. There’s a calculated cruelty to Paray’s reading that lends the first movement a more menacing character than usual, a dire foretelling of the finale to come.

The French-born Paray (1886–1979) is often compared to his approximately contemporaneous French compatriot Charles Munch (1891–1968), but I’m not aware that Brahms’s Fourth was high on Munch’s list of favorites. His only recording of the work I’m familiar with is the 1959 stereo RCA pressing (LSC-2297) with the Boston Symphony Orchestra, a recording I have on LP, and his reading of the symphony reveals a rather kinder, gentler Brahms than Paray portrays. The brass and winds at the outset of the second movement get the funereal tread just right, but Paray’s Detroit strings can’t quite match the fullness and luminosity of the BSO’s strings when they make their entrance at 2:46. The vise-like grip Paray exerts over the third movement, however—a study in controlled hysteria—once again screws up the tension for the awful dénouement about to play itself out in the last movement, which is announced here with one of the most shocking entrances I’ve ever heard.

The brass blasts out the passacaglia progression like a pronouncement from Hell. Paray’s vision of this symphony is more than one with a devastatingly tragic ending; it’s one that is pitiless in its implacable headlong rush to unsparing collective judgment. There is no underworld god here to yield to the flute’s pleading in the central episode, as the Furies yield in Gluck’s Orfeo ed Euridice to the strains of Orfeo’s lyre and allow the lovers to reunite. Punishingly, the brass passacaglia cuts the penitents off and casts them back into the maelstrom. From here to the end, there’s no looking back; it’s a one-way roller-coaster ride to Hades.

This is truly one of the most exceptional performances of Brahms’s Fourth Symphony I’ve heard. Even if there were nothing else on the disc, the price would be worth it just for that. But there is more on the disc, a lot more: a bouquet of the most popular overtures, preludes, and orchestral music from Wagner’s operas, all superbly well played and magnificently remastered on the Pristine Audio CD. I urge you to acquire this release without delay.