Pupil of Carl Flesch, teacher of the young Szymon Goldberg, chamber recital partner to Hindemith and Feuermann, Josef Wolfsthal (1899 – 1931) seemed to have a bright future before him when he was cut down at the age of 31 during an influenza epidemic.

Although he recorded fairly extensively during the 1920s for a number of German labels, most of his discs were of short encores. The selections presented here are his only electrical concerto recordings. A comparison of the Beethoven with his acoustic version of some four years earlier shows that he was already beginning to move away from the use of portamento in favor of a more modern, streamlined style of playing.

In the Mozart, there is a brief cut of some orchestra-only material in the middle of the second movement, made in order to fit the work onto eight sides. In addition, the final side (starting at Track 3, 6:25), made a year after the rest of the recording, was set down after Parlophon had switched from the Western Electric system to their own proprietary (and decidedly inferior) technology, which tended to make upper frequencies sound uncomfortably harsh.

Producer and Audio Restoration Engineer: Mark Obert-Thorn
Cover artwork based on a photograph of Josef Wolfsthal 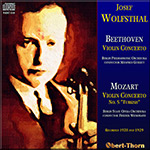