Hertz in San Francisco, final volume in a Russian vein

Plus the complete recordings of Gabrilowitsch and the Detroit Symphony

This final volume of Alfred Hertz’s San Francisco recordings features sides taken down in each of the three years they were recorded using the electrical process.  The 1926 sides were made using the same kind of setup as the ensemble’s acoustic recordings of the prior year – a reduced orchestra in a small studio, probably with tuba reinforcement of the bass line.  The following year saw a move into larger halls, resulting in a more natural concert sound.  Even though he was to live for another 14 years, the Glazunov waltz was the final recording Hertz made.

During the 1920s, the Victor Talking Machine Company cast its nets far and wide to sign up American ensembles to record.  In addition to the San Francisco Symphony, the label recorded the Hollywood Bowl Orchestra under Eugene Goossens and the St. Louis Symphony under Rudolf Ganz.  To those were added, for one group of sessions only, the Detroit Symphony under its music director, Ossip Gabrilowitsch.  The Russian-born pianist, who had settled in America and married Mark Twain’s daughter, led the Detroit orchestra from 1918 until his death in 1936.  Due to the relatively short running time of the Hertz recordings, I have added the complete Gabrilowitsch/Detroit recordings to this program.  They display the same kind of dynamic energy, interpretational flair and solid ensemble that distinguished the Hertz/San Francisco sides.

The sources for the transfers were prewar Victor “Z” or “Gold” label pressings for all items except the Rimsky-Korsakov work, which I was only able to locate in an Orthophonic edition.  Nearly all of the recordings presented here were plagued by severe pitch problems which I have endeavored to correct in these transfers.

Producer and Audio Restoration Engineer: Mark Obert-Thorn
Special thanks to Don Tait for the loan of some source material 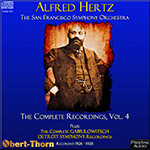