Krips' Brahms "sensitive, vigorous, and poised to a nicety"

One has to smile today at the final sentence in the Gramophone review reproduced above of Decca's 1950 LP issue of this recording - the 78s referred to appeared a few months after the Brahms Symphony's vinyl issue, and it's hard to believe today that many critics seriously felt that 78s had more to offer the music lover than the LP which so swiftly eradicated them after half a century of total dominance.

For sure some of the early LPs could be a bit hit and miss, quality wise, and the same can be said for the recordings, as witnessed here. Analysis of the 1950 Brahms recording shows a true full frequency response heading right up to the maximum available on a modern CD, whereas the 1951 Mozart recording, made by the same company in the same hall with the same producer, orchestra and conductor (the engineer in unknown for the Brahms but the legendary Kenneth Wilkinson was chief knob-twiddler for the Mozart) peters out with an upper limit of 12kHz, something one might have expected from a wartime recording, but not in late 1951.

But it seems that even today these recordings have suffered. Having first heard the quality of the LPs from which these transfers were taken, I was rather surprised to hear the hard-toned, overly-hissy and quite flat-pitched transfers they received in a Decca CD issue a very few short years ago. I had heard the Brahms first, and was delighted by both the performance and the recording, especially after initial investigations (using XR remastering for my own pleasure). When I heard how much improvement I had been able to make over Decca's own CD transfers I decided to press on, later adding the Mozart to the set for this release.

The sound here is clear, clean, full and well-focussed, perhaps more so in the Brahms than the Mozart, with its aforementioned frequency deficiency. Both, however, are a clear improvement on the now apparently-deleted Decca CD box set of 2003. 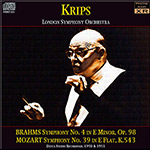 "It has become fashionable in recent years to belittle Brahms's achievement as a symphonist. Some critics have gone so far as to say that Brahms in wasn't really a symphonist, which suggests to me that they aren't really critics...

One might not care for Brahms's idiom, but that is no reason for trying to deny the existence of Brahms's architectural genius. "The defence of his works," says Tovey, "is an infinitely more faithful line of criticism than that of attack; for attacks are easy on superficial grounds, while the defence rests on bedrock." The bedrock of the Fourth Symphony is a masterly display of musical invention and imagination that is demonstrable by analysis. But to the average music-lover musical architecture is a quality that is felt intuitively rather than recognised by analysis. So the fact remains that most people who have ears to hear, nerves to feel, and a sublime ignorance of technical principles find the romantic fervour and sheer musical beauty of the Fourth Symphony a great experience.

And I think they will find the performance of the London Symphony Orchestra under Krips reproduces superbly this great experience. There are no histrionics about Krips's reading, in which everything is beautifully proportioned and carefully calculated. The music moves forward to its natural climaxes, in each of the four movements, with a wonderful feeling of inevitability that leads logically and dramatically to the crowning achievement of the great Finale. The orchestral playing is sensitive, vigorous, and poised to a nicety, and the recording does full justice to it. I look forward to the issue of this recording on 78's"

Excerpt from LP review in The Gramophone, November 1950 by R. H.

At first, these mono Decca sessions from 1950–51 seemed like a surprising choice for the Pristine treatment: While Krips led some fine Mozart opera recordings in the postwar period, his symphonic sessions, while solidly musical, have not generally been known for setting the pulses racing. Plus these performances had already appeared in a Decca Original Masters set. The sound there was surprisingly poor, however—grey, papery, and pitched flat. Pristine’s remasterings restore them to their correct pitch, along with a great improvement in openness, warmth, and definition. The result makes a real difference, significantly enhancing the performances’ projection of vitality and engagement.

The Mozart No. 39 is the second, and finest, of Krips’s three studio recordings, between his less personal earlier (1947) version with the same orchestra and label (available on Andante) and his much later Concertgebouw remake, mellifluous and rather bland (Philips, 1972). The 1951 performance is natural, unforced, mellow, and very Viennese in character—singing fortes, transparent balance, a timelessly idiomatic Mozartean sound. The first-movement introduction is very sedate by today’s standards, but the Allegro is buoyant, full of affectionate details, which are always given plenty of time to speak. In the Andante, the expressive string playing reminds us of Krips’s violin-playing background. The finale is leisurely but with real effervescence and point. Altogether a distinctive point of view to complement other classic versions from the time: the sleek élan of the young Karajan/VPO (EMI, 1949); the highly inflected liberties of Beecham/RPO (CBS/Sony, 1955); Walter’s irresistible marriage of romantic flexibility and classical point (NYPO, Columbia/Sony, 1953/56); Jochum’s rich, songful, zesty treatment (Bavarian Radio SO, DG, 1954); and the radically modern Szell/Cleveland in their first version of 1947 (Sony Original Jacket Collection)—brisk, clipped, and shapely.

The Brahms is conducted with a light, sure touch, gaining much from the lean, silvery sound of the LSO at this time—tight, focused strings; slightly acidic woodwinds; punchy brass. Krips’s interpretation is decidedly classical, straightforward, yet always naturally breathing. The first movement features some elegantly turned string playing, with fine momentum culminating in an exciting stringendo in the coda—quite gripping! The Andante is straightforward and unmannered, but eloquently sung; the Scherzo taut and excitingly built. The Passacaglia is swift and direct, with a masterly controlled tightening of the screws in its final stages. Among other 1950s versions, the closest in approach to Krips is perhaps the fleet, classical van Beinum/Concertgebouw (Philips, 1958). For a richer, weightier Brahmsian experience, listeners of this era were (and we today are still) well served by Karajan/Philharmonia (EMI, 1955), Jochum/BPO (DG, 1953), and Walter/NYPO (Columbia/Sony, 1951).

Altogether a surprisingly compelling listening experience. Recommended, whether or not you already have the Decca Original Masters set.