These transfers
The discs which originally held the present recordings were variable in condition, and at times quite extensive repair work has been necessary in order to remove or reduce bumps, clicks, scratches, swish and high-end noise. In order to maintain as much musical information as possible there is therefore some small variation in background noise, though I've tried to retain smooth progressions between the various sections of the recordings so this does not jar. Overall the sound is once again amazing for its vintage - despite repeated listening I remain astonished at what was achieved in 1940 and what I've been able to extract and reveal in these superlative recordings. 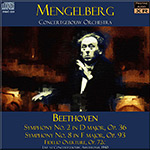 Andrew Rose continues to work his restorative magic on Mengelberg’s wartime performances, and the results are again revelatory in terms of improvements in dynamic range and presence, far outclassing previous CD releases from Music & Arts and Philips. I have one small reservation: The Pristine transfers are perhaps very slightly over-filtered in the quietest passages, occasionally resulting in a “disappearing” effect at the extreme end of the dynamic range. A case in point is the diminuendo to ppp before the crashing forte C♯ near the beginning of the finale of No. 8—the Philips sounds a little more natural here, through its heavy acetate crackle. But in every other respect, the superiority is Pristine’s all the way.

No. 2 is played for clarity, at deliberate tempos, with weighty precision. The first movement (complete with exposition repeat) has a remarkable sharpness of focus, with a fanatical concern to make every note count (e.g., the amazing fullness and breadth achieved in the descending figure in cellos and basses at bars 88 ff.). Mengelberg’s refusal to hurry this movement is altogether a far cry from the impulsive dash of Krauss (VPO, 1929/Preiser) or the extrovert assertiveness of Beecham (LPO, 1936/Beecham Collection), closer to the pliable, richly detailed approach of Kleiber (Berlin State Opera Orchestra, 1929/Dutton Labs or Naxos). The Larghetto is slow (12:33), played with great freedom and immense care over detail (hear the singing second theme, bars 48 ff., and the “speaking” quality of the strings/wind interchanges at 66 ff.). In the main theme of the finale, Mengelberg’s obsession with clarity of articulation might be thought to court pedantry. The controlled rigor of the approach culminates in a coda of ferocious, crushing power.

Interestingly, Toscanini takes a similarly weightier than usual approach in his 1939 cycle (Music & Arts), a performance of great intensity and élan, though less nuance than the Dutch maestro. Fascinating, too, to hear Mengelberg in another live version from three years later (1943/Tahra), now taking an altogether less extreme view of the work, notably faster and lighter.

The first movement of No. 8 has an exceptionally trenchant force and clarity, combining extreme rhythmic and phrase-structural precision with huge tempo flexibility in the secondary and closing material. Mengelberg radically lightens the dense textures of the minuet, imparting a rare degree of real dance lift. The finale is a miracle of refinement and precision at its moderate tempo, with plenty of time for the attention to detail to speak (and quite a contrast with Toscanini’s fierce, clipped approach in 1939, at a tempo uniquely—for its time—close to Beethoven’s metronome mark). For one small example, hear his dramatically enhanced timing of the deceptive chromatic resolutions at bars 48 and 224, setting the scene for the payoff of playing it straight at the motive’s third appearance (bar 408), where it finally resolves to the tonic—Mengelberg was ever the musician’s musician, for all his penchant for outsize gestures.

The performance of the Fidelio Overture is decades ahead of its time in lightness, verve, and sheer coruscating brilliance, anticipating the period-performance movement in its rhythmic snap (hear the Allegro’s main horn theme, the notes briskly clipped for maximum airiness and punch).