A superb range of early Romantic works conducted by Schillings

Teacher of Furtwängler, composer and conductor, in excellent new transfers

The few CD reissues devoted to recordings of Max von Schillings which have appeared so far have concentrated on his justly-acclaimed Wagner performances, as well as those of his own compositions (Mona Lisa, Das Hexenlied). This release aims to broaden our appreciation of his abilities with a program of early Romantic repertoire.

The sources for the transfers were American Columbia “Viva-Tonal” pressings for the Weber items; American “Okeh” Odeons (also pressed by American Columbia during their “Viva-Tonal” period) for the Schumann tracks; a pre-EMI laminated British Parlophone for the Egmont; and Italian Parlophon pressings (with a couple patches from a German Odeon set) for the Pastoral Symphony. Although the original engineering was not state-of-the-art for its time, the recordings from the 1928-29 season appear to have less overloading and blasting than the symphony, taken down the following season. 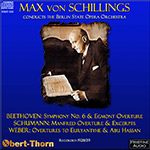 The playing is of high quality, Schillings’s conducting natural and unforced

This is one of Pristine’s most enterprising releases to date. Max von Schillings, better known as a composer in his day, was not a very prolific recording artist, and as a conductor has until now been remembered mainly (if at all) for his Wagner orchestral excerpts, available on Preiser. Release of these early electricals (1928–29) restores to availability a very important document in the early discography of Beethoven’s symphonies.

Anyone coming to this release with expectations of Kapellmeister-ish efficiency (as I confess I did) will be agreeably surprised to encounter music-making of much vitality and considerable interpretive individuality. The orchestra’s light sound—vibrato-free strings and lean winds—is very effective for the “Pastoral.” The playing is of high quality, Schillings’s conducting natural and unforced, flexible in pulse (especially in the first-movement development, “Scene by the Brook,” and “Shepherd’s Hymn”), but with fine forward momentum. His large-scale shaping is unerring, adding up to a very satisfying experience. (I’ll also note, once again, that the tuba reinforcing the basses was quite unnecessary in 1929, four years into the electric era; in this instance, however, he really earned his money, frantically joining in the 16th-notes in the “Storm”—hearing is believing!)

Comparing with other early electrical versions, it is interesting to observe Schillings steering a middle course between his compatriots Pfitzner (with the same orchestra, in the same year, on Naxos or Preiser) and Schalk (VPO, 1928/Lys): Pfitzner is very slow, bucolic, less flexible in tempo and less well played, but memorably rustic in the “Scene by the Brook” (his 14:00 sounding slower than Schillings’s even more leisurely, but more flexibly varied, 14:38), and with a very exciting “Storm” and deeply devotional “Shepherd’s Hymn.” Schalk, in contrast, is swift, buoyant, and elegant—almost a proto-period-instrument approach, with the 1920s VPO in incredibly characterful form. Weingartner (RPO, 1927/Naxos) is brisk, objective, and comparatively uninflected (dispatching the “Scene by the Brook” in a no-nonsense 10:56!), with the London orchestra notably inferior to both Berlin and Vienna.

Schillings’s Egmont is dramatically conceived and well shaped, though with playing less disciplined than in the symphony (less disciplined, in fact, than Nikisch’s rivetingly dramatic acoustic version with the LSO in 1913! [Symposium]). Enjoyable, but not much real contest with other early electrical classics from Mengelberg (NYPO, 1930/Pearl or Naxos—superb élan, thrust, and elegance) and Furtwängler (BPO, 1933/Koch or Naxos—darkly massive).

The Weber overtures are a delight, ideally light and airborne. As for Schumann’s Manfred, this 1929 recording is by far the earliest known to me (does anyone know of one earlier?). The performance is strikingly classical, swift, spirited, and transparent in texture (if not ideally refined)—not unlike Schuricht’s punchy 1946 version with the LSO (Lys, though in poor sound), and quite a contrast with the organ-like bronzed romantic splendor of Abendroth (Leipzig Gewandhaus, 1944/Tahra).

Mark Obert-Thorn’s transfers are well up to his usual standards. Altogether an important release, whetting the appetite for Schillings’s remaining recordings, including an “Eroica,” “Unfinished,” and Also sprach Zarathustra. Any chance, Pristine?