Concluding volume of three chronicling his only appearances with the orchestra

Both groups of four New York Philharmonic concerts received a radio broadcast - in each case it was the third of the four concerts, held on Saturday evenings, which was transmitted on the CBS radio network. At the present time the only surviving recordings of these concerts appear to have been taken from AM broadcasts. Although the quality, both of the recordings and the transmissions themselves is very good, they are inevitably diminished by the limited bandwidth and dynamic range of this broadcast medium.

P.S. On Sound Quality: Following the release of the first volume in this series I received the following in an e-mail from a regular contributor: "Why are you releasing these as "SI", though?  The sound is not that bad -- decent AM radio quality". He's right - in many respects the sound quality is excellent, with very low levels of background noise, an excellent signal, and a very clear recording. Certainly the recordings make for an enjoyable listening experience. But I do think that it would be easy to miss the small print pointing out that this is an AM radio broadcast and assume full-frequency 1958-quality sound if we didn't highlight the fact prominently, something which might not suit some purchasers. The idea of SI releases is to encourage listening and reading prior to purchase!

Writing in his blog at Gramophone, editor-in-chief James Jolly noted (with reference to the first volume of these recordings: "The sound is fine, though for a 1958 recording could sound a load better – the recordings were made from an AM radio broadcast. But I found that I soon attuned to the slightly cramped sound (Pristine label it "SI" for Special Interest: maybe they’re being slightly cautious): only the opening of the finale is a bit of a mess aurally." 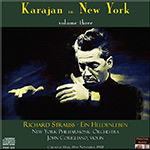