Second of three volumes chronicling his only appearances with the orchestra

P.S. Following the release of the first volume in this series I received the following in an e-mail from a regular contributor: "Why are you releasing these as "SI", though?  The sound is not that bad -- decent AM radio quality". He's right - in many respects the sound quality is excellent, with very low levels of background noise, an excellent signal, and a very clear recording. Certainly the recordings make for an enjoyable listening experience. But I do think that it would be easy to miss the small print pointing out that this is an AM radio broadcast and assume full-frequency 1958-quality sound if we didn't highlight the fact prominently, something which might not suit some purchasers. The idea of SI releases is to encourage listening and reading prior to purchase! 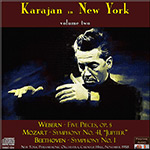