First of three volumes chronicling his only appearances with the orchestra 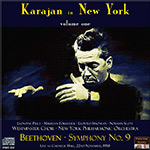 "Herbert von Karajan showed yesterday at Carnegie Hall that he could conduct with tension and virility. In dealing with the first and last symphonies of Beethoven he proved that he could combine an awareness of tradition with a strong feeling of personal involvement.

This was, for the most past, Beethoven brimming with vitality and passion. The New York Philharmonic gave Mr. von Karajan playing that had delicacy and muscularity, tenderness and power. It was a supple, responsive instrument. It cooperated with the conductor at every turn. It enabled him to prove that he was a Beethoven interpreter of character..."
Howard Taubman, New York Times, from Concert Review, 22nd November 1958


"To hear Karajan working with an American orchestra is a treat (he only ever conducted four in his entire life), and the New York Phil plays beautifully – only occasionally would a phrase have been more ‘rounded’ in Berlin. But the performance is very similar to the ’62 in conception, and the solo quartet (Leontyne Price, Maureen Forrester, Léopold Simoneau and Norman Scott) very classy; the choir is terrific (possibly better than Vienna’s Singverein to whom Karajan stayed extraordinarily loyal throughout his career). There's a terrific dynamism and vitality about the interpretation too.

The sound is fine, though for a 1958 recording could sound a load better – the recordings were made from an AM radio broadcast. But I found that I soon attuned to the slightly cramped sound (Pristine label it "SI" for Special Interest: maybe they’re being slightly cautious): only the opening of the finale is a bit of a mess aurally.

I found the performance fascinating: Karajan performed the Choral Symphony ten times during 1958 (four with the NYPO, three each with the Vienna and Berlin Philharmonics): no wonder that when he came to record it (and there’s also a live recording from the opening of the Philharmonie) there’s a confidence and total security in his vision. If you’re a Karajan admirer this is well worth a listen: you can sample the first movement and decide whether the sound is good enough for you..."

I was in the audience...

I should confess that I do not bring complete objectivity to this performance for the simple reason that I was in the audience when it took place. Like many record collectors then, I had been struck by Karajan’s initial postwar recordings made for English Columbia with the Vienna Philharmonic, particularly that of the Ninth Symphony. What was immediately clear from hearing him live was how he transformed the sonority of the New York Philharmonic and suggested in the first movement (without quite duplicating) those cascading legatos that typified that first of what ultimately proved to be his five studio accounts of the work. Granted this resurrection is not a performance for the general collector. For one thing, some of the orchestral playing is a bit sloppy, no repeats are taken in the second movement, and the end of the finale is a frantic mess. The four soloists were, of course, distinguished, though some may be surprised by Norman Scott’s opening recitative rendered with its appoggiatura sung as a very short grace note. Considering that the source of this release is an AM broadcast, the sound is remarkably good. Although somewhat limited in dynamic range, lacking uppermost frequencies, and suffering from occasionally skewed balances, the transfer remains eminently listenable with a very quiet background. Certainly for those interested in Karajan or in live performances in general, this release is worth having. The only announcement included is James Fassett’s closing statement.