Willem Mengelberg and the Concertgebouw Orchestra were recorded on a number of occasions by AVRO using high quality glass acetate discs, which produced significantly better results than those normally obtained by shellac discs of the era, with a much wider dynamic and frequency range than was usual at the time.

Of course these discs were by no means perfect, and trying to go "the extra mile" in restoring it to modern standards is fraught with difficulties. Modulation distortion abounds in the original - basically whenever the music gets louder, so does the hiss and noise levels, especially at the higher frequencies which were previously largely inaudible. The majority of the restoration effort has then been involved in trying to ameliorate this problem, though sharper ears may still hear its effect from time to time. There is at times also very slightly higher general background hiss than one might expect of a more recent recording, and one of course has to deal with the low level click and crackle present in just about any disc recording. 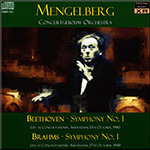 These performances have been previously available on other labels, often with confusingly different dates attributed: e.g., the Beethoven on Music & Arts, dated 4/14/1940; the Brahms on Lys, dated 12/13/1940. But they’re certainly the same performances, easily verifiable by a quick spot-check of details. The AVRO radio recordings were very good for their time, and the question is how these new Pristine transfers measure up to previous releases. The appetite is whetted by Andrew Rose’s high claims for his XR remastering’s yielding “extended sections … where we’ve been able to present a true full-frequency, 20–20,000 Hz frequency response, coupled with a dynamic range more befitting of a 1960s or 1970s analog recording—sound quality which is quite astonishing for its age. … One will rarely get closer to hearing a 1940 concert than this.” By and large, Rose’s claims are justified: The sound does indeed leap from the speakers with a visceral, colorful tangibility far surpassing any previous remasterings I’ve heard. So if you have these performances in previous incarnations and are wondering if the new purchase is warranted, the answer is an emphatic yes.

The performances are vintage Mengelberg: a fiery, Classical approach that was decades ahead of its time in its radically light, pungent textures, hand-in-hand with a penchant for extremes of tempo modification that have earned him (wrongly, I think) his reputation for ultra-romantic subjectivity. The Beethoven is one of the most characterful performances of this symphony I’ve ever heard, dispatched with rare brio and often a Rossini-like bubble, a miracle of rhythmic pointing and nuanced subtlety; dynamics are differentiated with fine-tuned precision (e.g., the light, airy single forte at bars 69 ff. in the first movement—compare Toscanini’s brutal assault here). Contrary to received wisdom, Mengelberg’s tempo flexibility was often at the service of articulating formal structure rather than subjective expression. Consider, for example, the purely musical rationale for his various tempo modifications in the first-movement exposition: to accentuate the chromatic drama at bars 17–19, heighten the form-defining rhetorical gestures at bars 69 ff., and dramatize the modal contrast at bars 77 ff. (Interestingly, his 1930 studio recording with the NYPO [Biddulph] is much smoother, with less pronounced tempo manipulation.) There is an almost incredible level of attention to detail (in the closing-section material of the Andante, hear how persuasively he shapes the delicate violin triplets [bars 54 ff.] through subtly differentiated accents and note-lengths); yet always with the larger purpose in mind (e.g., in the Menuetto, the immensely powerful effect of long, supple phrasing in a single breath). Unusually for its time, the outer-movement repeats are both observed (though not in the Andante).

Comparison with two live NBC versions from the previous year is instructive: Toscanini (Music & Arts or Naxos) is brightly lit and hard-driven, with little of Mengelberg’s subtlety; Walter, on the other hand (Arbiter), intriguingly comes across as a “missing link” between the Italian and the Dutchman, marrying the bright, highly charged NBC sound to a surprising degree of tempo flexibility.

In the Brahms, the first-movement introduction has enormous plasticity of ebb and flow at an uncommonly brisk tempo for its time (like Stokowski and Weingartner, he didn’t take un poco sostenuto to mean slow). The Allegro is characterized by a fanatical precision and rigor: Mengelberg invests the scherzando main theme with a “swung” rhythmic lift in common with other conductors—Walter (VPO, 1937/Opus Kura), Weingartner (LSO, 1939/EMI or Centaur), and Abendroth (BPO, 1941/Tahra); but none of these approach Mengelberg’s ferocious bite. Projection of phrase structure is set in high relief by an “organ stop” edge to the wind choirs (Stokowski achieves a similar sculpted clarity in his Philadelphia version of 1936, available on Andante). In the exposition, the variation in tempo between primary and secondary material is extreme, the latter slowing down to near-immobility in the horn/clarinet dialogue, bars 149 ff. (interesting to hear the young Karajan emulating the Concertgebouw/Mengelberg tradition of tempo modification in his 1943 version with the orchestra [DG Collector’s Edition]—but not very successfully, with surprisingly flaccid orchestral response).

The Andante is taken very moderately (at 10: 15, a halfway house between the speedy Toscanini at 8:39 [NBC, 1940/Music & Arts] and the very slow Walter at 12:57), and with an unusually solemn, sacramental quality. The autumnal third movement has more tension and point than usual, the B-Major Trio taken with a dashing, clipped precision that is quite unlike any other conductor. The finale is notable for its obsessive clarity—hear the extraordinarily sharp focus of the hocket-like passage for divided violins in the introduction (bars 24 ff.); the punctilious, indeed rather didactic, phrase articulation in the main theme; or the climax at bars 279 ff., delivered with an overwhelming ferocity and whiplash precision. But equally remarkable is its expressive spontaneity, from the amazingly vocal horn solo in the introduction to the soloistically singing massed strings in the second group. Compared to the first movement, the tempo range is surprisingly narrow.