The only issued recording of Monteux playing Schubert's 9th

Rare, live, and rather wonderful!

A few weeks ago I received an e-mail from a friend of Pristine's in Denmark, the former organist at Aarhus Cathedral Mr. Anders Riber, who stated: "I would like direct your attention to the following: Lately I got hold of an LP from Moscov 1956. It is Schubert 9´ in C with Monteux and the Boston.S.O. live from Russia. Considering geography and age, the recording is fairly good, a bit treble-sharp (and fast) but in many ways a terrific experience... it is in almost mint condition" Would I be interested, he asked, in remastering the recording for release?

A quick perusal of the Monteux discography revealed that the great French conductor had never made a studio recording of the work, and judging by its absence in the general catalogue had perhaps rarely performed it live. The prospect of a mid-50s recording in mint condition was certainly one too good to miss, and I'd like to publically express my gratitude to Mr. Riber for sending his rare record to me.

From a technical point of view it posed certain minor problems. Although the LP was a later pressing and, as suggested, in near mint condition, the original recording was made using 50s-era Soviet technology which (I'm guessing here) was probably not quite up to the standards found in the west at the time. Furthermore, being a live recording, the microphone placement was perhaps not all it could have been, and the resultant sound was a little veiled and sometimes acoustically boxy.

Happily this was almost entirely resolved quickly and easily by XR remastering and the mildest acoustic treatment. Although personally I would still like to feel myself just a little closer to the orchestra, it's still a very good live recording for its era, and a very enjoyable listen. (If it was an 'official' recording one might date it to 1951 rather than 1956, so you see it's not that far off!) All in all it's a surprisingly rare opportunity to hear one of the great orchestras and conductors tackle one of the great works of the classical repertoire together - and one that's sure to find a very warm welcome indeed in many music collections for all the right reasons.

LP from the private collection of Anders Riber
Transfer & XR remastering by Andrew Rose at Pristine Audio, April 2010
Cover artwork based on a photograph of Pierre Monteux 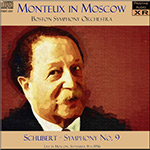 This concert at the Moscow Conservatory occurred in the middle of a summer tour that took the Boston Symphony Orchestra to Great Britain, Denmark, the Soviet Union, Switzerland, and France. Monteux shared conducting duties with Charles Munch. The rest of the program, if one may infer from a previous Tanglewood concert, consisted of Haydn’s 94th Symphony and Creston’s Second. As is generally known, this 1828 symphony was discovered after Schubert’s death and finally performed in 1839 in Leipzig with Mendelssohn conducting. Schumann’s ecstatic review referred to the music’s “finest technical skill, life in every fiber of the music, the finest gradations of coloring and care for the minutest detail ... it has, too, the same heavenly length (“himmlische Länge”) as, say, a four-volume novel by Jean Paul, who went on and on and never could come to an end.” Because of earlier uncertainties about the sequence of Schubert’s works and current ones about what should be considered an “official” one, the symphony has also borne the numbers seven, eight, and 10, but the number nine consensus seems to be holding so far.

Monteux’s approach to the music is of the rigor and vigor school. Where some of his colleagues have perceived implied accellerandi and ritardandi, Monteux drives resolutely on, resisting the temptation to speed up heading into the exposition or any urge to broaden the tempo as the first movement comes to its majestic close. He isn’t necessarily a literalist since he ignores every repeat except the first one in movement 3 and there are, as one would expect with him, very subtle adjustments in tempo when he does think the music (not necessarily the score) calls for it. I have no objection to the omission of most of Schubert’s repeats; if Simon Rattle suggested anything by observing them all on his recording it was that there might be such a thing as “unhimmlische Länge” ... it really does seem to go “on and on” and never come to an end. If you’re in the mood for this sort of virile, energetic Schubert Ninth (a cousin to the Szell and Toscanini recordings), this one comes in good 1956 broadcast sound. As admirers of such recordings as those of, say, Furtwängler, Krips, and Stock could tell you, there are more ways than one to conduct this symphony. I once heard Carlo Maria Giulini avoid the accellerando into the exposition of movement 1 by taking the introduction at a fast andante so that the tempo hardly changed as the exposition began, and Frederick Stock, on his recording, expands the tempo as the movement comes to a close, then suddenly steps on the gas and does the final two bars of music (the “da-da-da-da-da-da-dum”) in the original tempo. I love hearing such personal touches in standard repertoire even when I’m not convinced by them; in any case, there are no such interpretive oddities to be found in this 1956 Ninth and many will love it for just that reason.