The present all-French collection offers examples of Hertz/San Francisco recordings from each year that Victor sent its engineers out to California to record them. Indeed, the very first recording the orchestra made is here (Fra Diavolo), as well as sides from their final session (Le Cid). It was during that first group of acoustic sessions that Hertz’s only still-unpublished recording with the orchestra was made: the Prelude to Le Deluge by Saint-Saëns, with the ensemble’s concertmaster (and Menuhin pedagogue) Louis Persinger as soloist. The tremendous advance made by the introduction of electrical recording is vividly illustrated by the two versions of the Phèdre Overture, made three years apart. 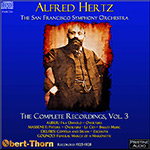 Treat yourself — I guarantee you won’t regret it.

This is the third and final installment in what has proved to be a revelatory series, notable both for its high standards of orchestral execution and interpretive individuality. It covers Hertz’s recordings of French music (the first two volumes were devoted to German repertoire from Beethoven to Wagner).

The Auber overture, recorded near the end of the acoustic period in January 1925, is played with great precision, refinement, and Gallic esprit. Massenet’s Phèdre was taken down at the same time, then remade electrically in 1928. Although the 1925 sessions are uncommonly vivid for acoustic recordings, the difference in three years is immense, and the 1928 recording captures the large orchestra with thrilling fidelity. The interpretation is elegant, fiery, and intensely dramatic, with playing of real sheen and polish—hear the improvisatory surge Hertz imparts to the second theme, conjuring an amazing soloistic flexibility from the massed strings, reminiscent of Mengelberg. The orchestra’s sonority is appropriately French rather than Germanic: organ-like, with sharply differentiated wind colors—in fact very recognizably the sharp, pungent textures familiar from Monteux’s later tenure with the orchestra. (Monteux took over as music director in 1936, and one of the ear-opening surprises of this series has been the discovery that that distinctive San Francisco sound was already fully developed in the Hertz years.) Fortuitously, a live 1950 performance of the overture with the French maestro exists (Music & Arts), and makes for a fascinating comparison, the two versions strikingly similar in sound and detail, Hertz a little more grandly spacious, Monteux more theatrically volatile. The Delibes excerpts are ideally piquant and spicy, though these earlier electricals from 1926 are notably less refined than the 1928 sessions (in 1926 they still used tuba to reinforce the string basses). Gounod’s satirical miniature makes a surprisingly indelible impression, with acridly pungent wind contributions. Massenet’s ballet music is done with unforgettable color, vibrancy, and panache; the 1928 recording is quite spectacular.

Mark Obert-Thorn’s transfers are superb. If you know the first two volumes, you’ll need no prompting from me. If you don’t, I recommend you treat yourself to all three—I guarantee you won’t regret it.