The recordings offered here are of particular interest to the Stokowski collector. The Brahms is a considerably more lively rendition than either of the conductor's studio recordings, and as such had particularly caught the ear of Edward Johnson of the Stokowski Society. Also present in the Thomson and Chabrier* are the only two recordings of these works under Stokowski's baton - the former indicating his frequent role as a champion of then-living American composers.

As described below, there are some technical issues with the sound quality at times in this recording which have led to its designation as a Pristine SI release - in this case the recording is perhaps something of a borderline case, but at the time of writing we have been unable to find a better-quality original source and believe that, from a musical perspective it is more than worth the time and effort spent restoring it and remastering it for issue.

As with all our SI issues, we recommend you sample the recording prior to purchase.

Following the release of this recording, which we believed to be a live broadcast, some doubt was raised concerning the performance of the Chabrier. The piece did not appear in the programme for the performance itself, nor is it mentioned in the orchestral archives as having been conducted by Stokowski.

However, two weeks later a performance of this short piece was given, under the baton of Mitropoulos. As a result of extensive investigations undertaken by Edward Johnson, and with the assistance of the conductor and music writer John Canarina (who first raised the question), Nathan Brown and Frederick Fellers, we have managed, we think, to solve the mystery.

This was evidently a 1 hour program issued by the Armed Forces Radio Service. They used the original announcers mainly, but when they had to fill out the 1 hour with a short work, they would often just borrow it from any other concert without bothering to say just who the conductor was, or in some cases citing the wrong conductor, as the AFRS announcers were not informed in classical artists. They just thought no one would care or know the difference. Now, with hindsight, and references, we can determine the actual conductor. This happened fairly often.

It was common for many of the radio broadcasts of all types from all the radio networks to be recorded, and later slightly edited versions were transferred to 16 inch discs that played at 33 1/3 rpm, and these were sent all over the world to be played by local AFRS stations for U.S. military personnel serving in those foreign parts.  In the editing process any commercial messages were removed and spoken commentary may have been edited.  It also happened from time to time that a musical selection from a different broadcast was sometimes added to a broadcast that happened at a different time.  This may have been done for timing reasons.

Here are some examples that I can speak with some authority because I have the recordings.  There was a concert for radio on NBC on 6 January 1945 of the Indianapolis Symphony Orchestra directed by Fabien Sevitzky. The AFRS version of the same radio concert has exactly the same music, but the spoken commentary has been edited and slightly abbreviated.  I have another "broadcast" I acquired from the Library of Congress that was broadcast by the Voice of America on 25 May 1943.  It purports to be a live concert from Indianapolis with the applause of the audience and it has a Spanish announcer speaking.  However, there was NO concert performance that day.  The source of the musical selections was from different ISO-Sevitzky CBS radio broadcasts from 19 November 1942, 11 and 19 February 1943 and 19 March 1943.  These were part of the regular weekly ISO-Sevitzky broadcasts on CBS and were done without audience solely for the radio audience.  So the 25 May 1943 "concert" was a complete fabrication with audience applause added.

I also have the AFRS version of the NBC Symphony-Toscanini broadcast of 2 September 1945.  The AFRS version omits the National Anthem that began the programme and probably also omits some of the spoken announcements.  The music, except for National Anthem, is complete as broadcast, but before the final item on the programme, the Dance of Terror and the Ritual Fire Dance from El Amor Brujo are added.  These two works came from the broadcast of 3 September 1944, but at least the conductor was the same.

I speculate that your concert of 16 April 1950 may have come from something like the AFRS broadcast recordings mentioned above.  James Fassett was the regular announcer of the Philharmonic broadcasts on CBS.  At least he certainly was in the later 1950s when I began listening regularly... Sometimes, in the repackaging of the concerts for the AFRS a new announcer did the speaking.

I wouldn't suspect that Mitropoulos would have a problem with this, because these broadcasts were all done for the morale of the military serving overseas, and I doubt any money was involved.  Most likely, since this was all done in foreign places, Mitropoulos probably never heard a word -- pro or con -- about it.

The source recording for this release was a reel to reel copy of an acetate disc recording. The location of the original is currently unknown, if indeed it has survived. Alas the tape copy, believed to have come from Stokowski's assistant Jack Baumgarten and the only one we've been able to find, has suffered its own damage due to "sticky shed" syndrome, resulting in some at-times inconsistent treble response. Fortunately the condition was diagnosed and the tape treated prior to the present transfer in order to prevent further magnetic oxide loss, however some damage had already been done.

The recording is also subject to occasional peak level blasting. It is unclear whether this was caused by the tape or the original discs. Much of this has been tamed, and overall the recording is certainly very listenable. As such, post-restoration it is very much a "borderline" case for the "SI" categorisation - an older recording of the same audio quality would not have been graded in this way. However, there are inconsistencies in it, and the overall quality is perhaps slightly lower than one expect from a 1950 recording.

*This is the only extant performances of this work by Stokowski

Broadcast from Carnegie Hall, Sunday, 2nd April 1950 & **16th April 1950 by CBS Radio
Believed to be sourced from a programme prepared for the American Forces Radio Service

Source material provided by Edward Johnson from his private collection
Transfer & XR remastering by Andrew Rose at Pristine Audio, February 2010
Cover artwork based on a photograph of Leopold Stokowski 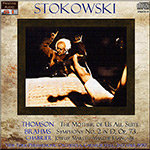