THE MAGIC KEY OF RCA

A stellar line-up for a truly "Magic" hour of radio

The Magic Key of RCA ran as an hour-long musical variety programme on an almost-weekly basis for 204 episodes over four years, between 29th September 1935 and 18th September 1939. The broadcasts went out on Sunday afternoons between 2pm and 3pm on NBC's Blue network, and featured a very wide range of artists and guests - the very first broadcast, for example, included contributions not only from conductor Walter Damrosch and singer Paul Whiteman, but also Walt Disney and radio comedians Amos 'n' Andy.

The 79th broadcast of 18th April 1937 came live from the Philadelphia Academy of Music, on the eve of the Philadelphia Orchestra's five-week "coast-to-coast tour of 11,000 miles with stops at twenty-four cities" under Ormandy and Iturbi, travelling on a "special de-luxe 9-car Pullman train". The broadcast carefully promotes not only the tour, but also RCA Victor's long association with the orchestra, and of course RCA's own electrical products.

In fact the "Magic Key" series came about as a means of promoting an electronic tuning aid developed by RCA for its radios in 1935, and was one of a number of 'magic' references dreamed up by RCA's PR department, as this excerpt from a technical website makes clear:

RCA registered their first electron-ray tube, the 6E5, on June 27, 1935. This tube initially appeared in RCA’s console-model product line that same year. RCA was fearing a loss of market share to competitors’ new lines of very small and midget radios, many of which were designed and produced in Los Angeles. RCA’s promotion touted the "Magic Eye" as an elegant feature of their upper product line - where profit margins were greatest. Not surprisingly, the 6E5 wouldn’t fit inside the competitors’ smallest sets. The name "Magic Eye" quickly gained acceptance with the public as the standard identity for the electron ray tube and tuning eye feature in consumer radio sets, regardless of manufacturer.

The source recording for this release, supplied to me by Edward Johnson of the Stokowski Society, appeared to have originated from an AM broadcast recording captured on acetate discs.However, it had already received some quite strong noise processing which I was unable to undo, hence the release's designation as an "SI" release, meaning of "Special Interest" - but of reduced fidelity.

It has been fully restored and XR-remastered, greatly improving the sound quality over the original as supplied, but several aspects of the audio had already been compromised beyond restoration. We believe that, for many collectors, this will prove secondary to simply having this remarkable recording available to listen to.

Pristine Audio SI releases, although processed at 32-bit or higher resolution, are not available as 24-bit downloads as there is no sonic improvement possible over the standard 16-bit versions of these issues. 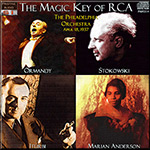