Ormandy in his element with big orchestral Bach

Ten transcriptions and one Bach original - all sounding marvellous!

Despite nearly a decade passing between the earliest and latest recordings presented here I was surprised to find better top-end extension in the older recordings here than the newer, certainly in their original LP transcriptions. Indeed in almost every respect the 1940s recordings sounded technically superior to their 1950s counterparts prior to XR remastering.

One of the key things which the re-equalisation aspect of XR remastering can achieve is tonal correction, and in this case I was able first to further improve the sound of the 1940s recordings, then to use these as a reference for the rest of the set. The result is a far more balanced collection - the later recordings opened out considerably from their constricted and boxy sound, and the full album can be enjoyed as if it were one, rather than several recordings.

*This recording follows J. S. Bach's original orchestral score. However, the performance, with the full Philadelphia Orchestra, is more in keeping with the other transcriptions here and is thus some way from the small chamber ensemble with harpsichord obbligato envisaged by the composer.

Transfers by Edward Johnson from his private collection
XR remastering by Andrew Rose at Pristine Audio, January 2010
Cover artwork based on a photograph of Eugene Ormandy 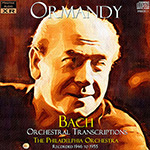 William R. Smith, who is assistant conductor to Ormandy at Philadelphia, is an organist of considerable attainments. Like Stokowski, who also started with that instrument, he knows his Bach from the inside, a factor which lends that extra air of authority to his arrangements. Mr. Smith is well-known in Pennsylvania and Virginia for his work as an organist, pianist, choral conductor, arranger and composer. He has been Director of the Philadelphia Youth Orchestra and, in 1953, was appointed conductor of the orchestra at the Curtis Institute of Music.

(The above notes are taken from Philips LP SBL 5207)

Lucien Cailliet (May 27, 1897– January 3, 1985) was an American composer, conductor, arranger and clarinetist. Born in France, Cailliet studied at the Conservatory in Dijon before migrating to the United States in 1918. Cailliet worked as staff arranger for the Philadelphia Orchestra. During this time, he founded the Cherry Hill Wind Symphony, which would later become the Wind Symphony of Southern New Jersey. Cailliet is well known among wind musicians for his faithful arrangements of orchestral music for wind ensemble. In particular, his arrangements of Elsa's Procession to the Cathedral (from Wagner's opera Lohengrin) and Finlandia (a symphonic poem by Jean Sibelius) have become staples of the wind ensemble repertory.

These notes from Wikipedia: http://en.wikipedia.org/wiki/Lucien_Cailliet

Sir Edward William Elgar, 1st Baronet, OM, GCVO (2 June 1857 – 23 February 1934) was an English composer. He is known for such works as the Enigma Variations, the Pomp and Circumstance Marches, The Dream of Gerontius, concertos for violin and cello, and two symphonies. He also composed oratorios, chamber music and songs. He was appointed Master of the King's Musick in 1924.

These notes from Wikipedia: http://en.wikipedia.org/wiki/Edward_Elgar

A long time ago, when I was starting out on my journey through the repertoire, I came upon a 10-inch Columbia LP with the title A Bach Program. Since it was a 10-inch LP, the price was only $3, so my allowance covered it. It was my introduction to the music of J. S. Bach. Of course, given that it contained four orchestral transcriptions by Eugene Ormandy, some folks might insist that I hadn’t really been introduced to Bach at all. Three of the pieces, the Passcaglia and Fugue in C Minor, the Toccata and Fugue in D Minor, and Jesu, Joy of Man’s Desiring, appear at the beginning of this CD. The original 10-incher also contained Sleepers Awake! The rest of the CD is taken from a Philips edition of what was issued in the U.S. as Columbia ML 5065. The earlier selections were tranferred not from the 10-inch LP but from a 12-inch reissue that included transcriptions of music by Handel and Corelli.

Leopold Stokowski, a former organist, had begun a Philadelphia tradition of performing Bach organ works and a few other pieces in orchestral transcriptions, and Ormandy apparently kept up the tradition, also using some transcriptions by others, including William R. Smith, the orchestra’s assistant conductor, and Lucien Cailliet, who doubled on bass clarinet and, after his retirement from the orchestra, went on to compile an extensive list of credits as an arranger/composer in Hollywood. I actually heard Ormandy lead the Chicago Symphony Orchestra in a performance of his transcription of the Passacaglia and Fugue in C Minor. Maybe I was hopelessly inoculated by that 10-inch LP, because I have never been opposed on general principles to this sort of thing, whether it came from Ormandy, Stokowski, or anyone else—I don’t even object to Jacques Loussier. Bach himself certainly engaged in the practice and his music seems to lend itself to a variety of approaches and arrangements. If you find this sort of thing appalling, consider yourself warned.

The transfer is as well done as one has come to expect from Pristine Audio, resulting in a sound described as “ambient stereo,” not fake stereo, but a “spreading” of the monaural sound that, presumably, is intended to enrich it. Not surprisingly, the three mid-1940s recordings sound a little duller than the 1954 Philips. If you already own the deleted Locked in the Vault reissue No. 79 and can get along without the 1940s stuff, it contains what is on the Philips LP, but the transfer engineer, using a good copy of ML 5065, produced a CD that does not require replacement.