The sources for the present transfers were a mixture of American Columbia “Viva-Tonal” and “Full-Range” pressings for the Mendelssohn and English Columbias for the remainder. The Basle recordings are rather rare; Invitation to the Dance was the only title released in the USA, while Weingartner’s Tempest excerpt was only released in Switzerland.

Producer and Audio Restoration Engineer: Mark Obert-Thorn
Cover artwork based on a photograph of Felix Weingartner 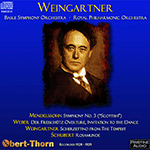 This is one of Pristine’s most important releases to date, making available what is (so far as I’m aware) the first-ever recording (1929) of Mendelssohn’s “Scottish” Symphony. (Its only previous official CD incarnation was in EMI/Toshiba’s large Weingartner edition of some years ago, but never available outside of Japan.)

The slow introduction to the symphony is swiftly flowing and flexible, the light, sweet strings and lean, cutting winds—wonderfully transparent textures through the obvious limitations of the 1929 recording—immediately conjuring an authentically Mendelssohnian sound world. Given Weingartner’s classicist inclinations, the ensuing Allegro is surprisingly flexible in its constant tempo modifications, though he manages to make them all quite natural-sounding. There is some casual ensemble by today’s standards (truth to tell, the Scherzo really flies by the seat of its collective pants!), and a tuba can be heard discreetly reinforcing the double basses (this was hardly necessary in 1929, four years into the electric era, but the practice evidently died hard). The slow movement is supple, taut, and elegant, at 8:36 faster than virtually anything before the period-performance movement, and much the better for it. The finale goes with wonderful verve; Weingartner then shortens the major-mode coda by cutting several repetitions. Overall, a very impressive performance, of long lines, dramatic sweep, and an unforced expressive authenticity.

Unlike its “Italian” sibling, the “Scottish” was surprisingly neglected in the 78 era; between Weingartner’s gramophone premiere and the LP era came Mitropoulos/Minneapolis (1941, reissued on the short-lived Nickson Records) and a Toscanini/NBC broadcast of the same year (Testament). Although both performances are highly compelling in their way (the Greek maestro with a positively Expressionistic intensity, the Italian exciting but rather unyielding), neither sounds very idiomatically Mendelssohnian.

The fill-ups, from Weingartner’s Basel days in 1928, are real rarities. Though hardly one of the world’s great orchestras, the Basel ensemble is highly characterful in the Freischütz and Rosamunde items; the sound here is far closer to present-day period-instrument groups than modern orchestras—indeed, it is easy to believe that these light, transparent sonorities were close to what Schubert and Weber had in mind. Like many conductors who also composed, Weingartner took the latter activity very seriously, but on this evidence his compositional talent was, well, unremarkable. Weingartner the composer was, however, unable to resist some serious monkeying with Weber’s Invitation to the Dance, where his ingenious contrapuntal overlays and recombinations put me in mind of (of all things) Godowsky’s similar treatment of Chopin’s études! But it makes a refreshing change from the over-familiar Berlioz version, and it’s all great fun, which is not diminished by some fairly chaotic ensemble.

Mark Obert-Thorn’s transfers are every bit as expert as one would expect. An indispensable disc.