Paray and the Detroit Symphony Orchestra on top form again

These three recordings constitute the only stereo Mercury Living Sound recordings made by Paul Paray with the Detroit Symphony Orchestra that Mercury themselves have not reissued on CD. Their reasons for not doing so, along with other inexplicable omissions from Paray's mono recordings, remain unknown and hard to understand - although Paray is more commonly associated with French composers, yet again he is superb both with Beethoven and Mozart.

From a technical point of view the later recording was clearly superior to the earlier one. The levels of tape hiss on the 1956 Mozart required considerably more noise reduction to tame, and the top end was not as clear or bright as the two 1959 Beethoven recordings. In fact, if anything, the latter were overly bright, as is often the case with Mercury's 1950s Living Presence recordings, and taming this had the happy side-effect of reducing overall hiss levels to something far more acceptable.

In all cases disc surface noise was minimal. Both 1956 and 1959 recordings did however suffer from a degree of induced main hum, something quickly and precisely dealt with in audio restoration these days. Both also suffered from occasional tape drop-outs on one or other channel, which is also been cured. The Mozart does remain the slightly noisier of the two, but neither suffers from hiss or noise to an extent which should prove an annoyance at any reasonable listening volumes, and the Beethoven Symphonies in particular would stand comparison to almost any recordings made in the analogue era - after all, Mercury were very good indeed at what they did when making Living Presence LPs, as their long-lasting reputation for superior recordings repeatedly suggests.

Transfers by Edward Johnson from his private collection
XR remastering by Andrew Rose at Pristine Audio, January 2010
Cover artwork based on a photograph of Paul Paray 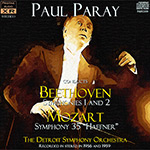