The Alfvén was transferred from its 12-inch reissue on ML-5181. I have not heard the original 10-inch release (AL-35), but on this LP, it is plagued by severe pitch instability. The work starts more than a half-tone flat, and gets progressively flatter as it goes on. Through careful pitch checking, I have corrected the playback speed so that, perhaps for the first time, it may be heard at the proper pitch throughout. 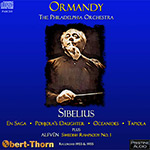 Pristine’s release of this collection, on the heels of its CD featuring Ormandy’s 1954 recordings of Sibelius’s Fourth and Fifth symphonies (reviewed in the March/April issue), is a most felicitous event. Ormandy recorded these four tone poems in 1955, the year of Sibelius’s 90th birthday; for some reason, however, they were not released until early 1958, when Columbia issued them on a single LP, ML-5249. The record quickly became a casualty of the changeover to stereo, and was out of print by the end of 1963; it has never been one of the easiest to find of Ormandy’s LPs. This is doubly unfortunate: First, Ormandy remade only one of the four works in stereo for Columbia (En Saga, 1963), and by the time he revisited them all in the 1970s for RCA he was quite a different conductor; second, in three out of four instances at least, these are vital, compelling performances in their own right. I believe this is their first reissue.

The chief characteristics of these Sibelius performances, like many of Ormandy’s finest recordings, are an ideal sense of pacing and an impression of natural unfolding of the music, free of mannerism or italicization. The early En Saga, which can sometimes sound repetitious and overlong, never loses momentum here; Pohjola’s Daughter features some lovely woodwind solos and powerful brass chorales. Ormandy’s 1955 Tapiola may not be as monumental as some later versions, including his own RCA remake, but it is still spellbinding, with a terrifically fierce storm episode. Only The Oceanides is less than satisfactory; everything here sounds just a bit too fast for comfort, undercutting the tranquility of the opening section’s nature portrait and undermining the force of the climax. Interestingly, one of the finest versions of The Oceanides on disc, that of Sir Thomas Beecham, was taped precisely five days earlier than this one; its duration is 10:23, almost exactly two minutes longer than Ormandy’s 8:24.

Hugo Alfvén’s Swedish Rhapsody No. 1, recorded in 1953, became an Ormandy specialty; folksy and colorful, it’s an ideal showpiece for virtuoso orchestra. It makes a delightful filler for this CD, but it does sound a bit disconcerting coming as it does directly following the gripping experience that is Tapiola.

The transfers are by Mark Obert-Thorn, well known for his remasterings of 78s but now increasingly working with LPs as European copyright laws permit. (Pristine is based in France.) I had access to both the pure mono version of this CD and the “ambient stereo” version; while the latter is far less disconcerting than the old “electronically rechanneled” fake-stereo recordings of the LP era—it essentially adds a sense of space to the sound without trying to localize particular instruments or frequencies—I still prefer hearing mono recordings in mono. The description of the process on Pristine’s Web site emphasizes that the “ambient stereo” sound is fully mono-compatible, so I suppose there’s nothing to lose unless, like mine, your preamp has no mono switch. Compared directly with the LP, the transfers have a subtly smoother frequency response but a slightly less brilliant one, as though the upper overtones were filtered out. The biggest drawback to the sound, however, is the mono originals; Sibelius’s music is rich in orchestral color and detail, and there are times when even a veteran listener to historic recordings longs for the transparency and depth of stereo. That, however, may be the only thing preventing these performances from being awarded Hall of Fame status.

The best news may be that Obert-Thorn plans to issue Ormandy’s riveting 1951 reading of the complete Lemminkäinen Suite—its first recording, I believe, and possibly still the most exciting. Meanwhile, this present collection warrants the highest recommendation.