This fascinating recording comes from the archives of Edward Johnson. It dates from precisely one week after the surrender of Japan brought the Second World War to an end, and in Bernard Herrmann and Mitch Miller features two artists who would go on to become major names in their respective fields - Herrmann as a hugely successful and influential film composer, and Miller as one of the major movers and shakers in the music industry. Herrmann was a passionate Anglophile, which perhaps explains the programme here, and he and Miller had given the US première of Vaughan Williams' Oboe Concerto three months prior to this broadcast.

The present recording had previously been very well dubbed onto high quality 1/4" tape from what sound like excellent acetate discs for this era. For much of the recording the disc origin of the recording is hard to detect, with very little surface noise. However there are some areas where surface clicks and the occasional swish may be detected, though these have been kept to a minimum.

The recording is technically notable for its wide dynamic and frequency range, with a particularly well-extended treble for this era. I have retained announcements as broadcast, as well as including a short section of the start of the news broadcast, for historical interest.

A CBS live radio broadcast, 9th September 1945, introduced by Sidney Berry, from the archive of Edward Johnson
Transfers and XR remastering by Andrew Rose at Pristine Audio, November 2009
Cover artwork based on a photograph of Bernard Herrmann 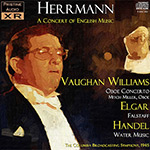