By 1958, Decca has been recording in stereo for four years, regularly sending out two production teams, one to make the stereo master, the other the mono master. Each team of producer and engineer worked independently of the other to produce the optimum sound for their system. However, when a system for the successful replay of stereo discs was finally unveiled in 1958, it seems the company decided a new and spectacular recording was required for the very first record in their new stereo series of SXL discs, something that could utilise all of the experience amassed over the previous as-then-unreleased stereo sessions.

Clearly the 1812 Overture here is designed as a showpiece. The stereo imagery is both very wide and very precise, and if the studio trickery that produced the "cannon shots" (over-dubbed speeded-down gunshots panned around on tape and chopped roughly together) sounds desperately primitive today, the effect when heard for the first time was surely enough to launch a hundred discs of stereo marching bands and steam trains to thunder through your living room. Yet, as the Gramophone reviewer in October 1958 pointed out, "This is all loud music ; or at least it certainly has its share of loud moments. It would seem to be a good programme for showing off the, new medium (not only in consideration of the more massive passages); and as a programme it is helped notably by 1812 being allowed to conclude a side, as it clearly must a programme... This combination should be, and is, shattering; but, even so, the virtues of the recording are perhaps more readily perceived in some quieter moments—particularly in the Italian Capriccio, which reproduces the music in places with quite startling clarity."

It is a very well-recorded album, and this transfer, from a near-mint and very well pressed first edition LP, demonstrates this very well. I have resisted the temptation to pull in the extreme stereo width a little. Beyond correcting an odd frequency gap at around 260Hz and lifting the extreme top end (above 10kHz) a little, the sound is pretty much unaltered beyond a general 'tightening up' . Some surface swish on the second side required intervention, but otherwise it's a pretty honest representation of that 1958 release. As the Gramophone reviewer concluded, "In every respect, in fact, this is a first-class record".

*N.B. The title of this release, "Tchaikovsky First Stereo Orchestral Recordings", isn't intended to suggest that these were the first recordings of music by Tchaikovsky ever made in stereo, which is highly unlikely! It refers, of course, to this being Decca's first stereo LP issue. 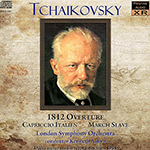