This has been one of those happy occasions where almost everything seemed have gone well in the recording and LP manufacturing process to create an ideal disc from which to work. The orchestra - The Royal Philharmonic masquerading under a pseudonym for, presumeably, contractual reasons - plays brilliantly and is excellently recorded. The pressing was as close to mint as a record gets after it's had one or two plays, and was very well mastered to begin with.

Thus after some very minor restoration work I was able to work the XR magic on this recording - which served to lift a couple of decades or so off the perceived age of the recording - then add in some gentle Ambient Stereo processing and sit back and enjoy. It really is a delight from start to finish - in every respect.

ransfers and XR remastering by Andrew Rose at Pristine Audio, November 2009
Cover artwork based on a photograph of Hermann Scherchen 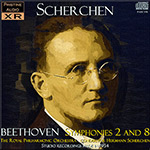 Scherchen's performance of the Finale of the 8th is the most exciting thing I have heard on a record for a long time. Don't miss it! He actually plays it at Beethoven's metronome marking, a speed usually considered impossible, and the result is tremendously exhilarating, the sort of Finale performance that would bring any concert-hall audience to its feet with cheers.

Of course, this could not be brought off without an orchestra of the utmost skill (for even at this speed it is brilliantly played). No lesser collection of players could get away with this or, too, with the Finale of the 2nd Symphony. Who they are, one doesn't know, for there is no orchestra of this name playing publically in London.

But to return to the music. The whole of the 8th Symphony is played at speeds that are as near as matters Beethoven's, as given in his metronome marks. This gives us a first movement that is faster than we usually hear, and I personally felt uncomfortable as I was listening ; but perhaps this is a matter of what one is used to and one should try to accustom oneself to it. The second movement, with such light and neat playing, is wholly delightful, and the Minuet is extremely alive and alert. This is certainly a performance to be heard, and heard over and over again, for it is full of revealing understanding.

Beethoven gave no metronome markings to his 2nd Symphony, so we lack such precise indications of what he really wanted. Scherchen takes the swift view again, with a slow movement speed that is almost allegretto in feeling. Toscanini and Schuricht play it similarly. Goossens' performance is the very reverse, so much so that even if you prefer a slower speed, I doubt whether you will really enjoy that particular one. Scherchen continues with a delightfully fleet Scherzo and a Finale that is indeed allegro molto.

This is a record as interesting as it is successful in its interpretations, and it is equally distinguished by the wonderful playing. The recording needed some top taken off on my gramophone and the volume turned up fairly high, but it was then very acceptable.

Altogether one of the best Seconds ever. A rightly legendary Eighth, in the best sound ever. Does that sound like a recommendation?

You know the old joke about London buses: You wait all day, then three come at the same time. Hermann Scherchen’s early-1950s Westminster Beethoven cycle, divided between orchestras in London and Vienna, has not fared well on CD: No. 8 has surfaced a few times (MCA/Millennium, DG, EMI), as have later stereo remakes of Nos. 3 and 6, but the complete mono cycle has been available only in an unofficial set on Archipel (itself copied from a rather lackluster previous Japanese release). But in recent months, first a splendid new remastering from Tahra comes along, and now what looks like the first installment of a rival edition from the indefatigable Andrew Rose of Pristine Classical. Both are first-rate, and far superior to anything previously available. Tahra doesn’t specify its sources, but I’d imagine they’re as close to the original tapes as they could get their hands on. Tahra’s transfers are a little brighter and quieter; Pristine’s are from mint U.K. Pye Nixa LPs, and are a little warmer and more precisely imaged. In the course of comparative listening I have developed a slight preference for the Pristine, but am glad to have both.

One notable aspect of Scherchen’s cycle was its marked contrast between the two orchestras: the Vienna State Opera Orchestra coming off very much as country cousins to their silken-toned, virtuoso London counterparts, at the time identified for contractual reasons by the pseudonym “Philharmonic Symphony Orchestra of London,” but none other than Beecham’s illustrious Royal Philharmonic in its prime.

The slow introduction to No. 2 immediately impresses by the refinement and pinpoint precision of the playing, leading to an Allegro of superb discipline at a very fast tempo—though Scherchen’s 9:26 was topped by Beecham’s wicked 8:34 with the same orchestra in 1957 (EMI; neither conductor takes the repeat). The orchestra digs in with gusto for Scherchen (hear that ff string passage in A Minor toward the end of the transition!), finally throwing caution to the winds in a coda of truly frenzied abandon. The fabled RPO wind playing is very much in evidence in the slow movement, taken at a real larghetto, much faster than the norm for its time (though Karajan also got the tempo right in his various recordings, starting with the contemporaneous 1953 Philharmonia version). The finale is superbly alive to Beethoven’s incomparable wit, with hair-trigger responses at a challenging tempo, which the coda then pushes to a dangerous extreme. Altogether one of the best Seconds ever.

The Eighth is if anything even more remarkable. Scherchen’s radical one-in-the-bar rethinking of the first-movement tempo created waves at the time, and it is still easy to see why—at 8: 23 (with repeat) this remains one of the fastest ever. Although Hogwood (L’Oiseau-Lyre, 1989) dispatches the movement in 8:00, the feat is less remarkable with period instruments; what truly impresses here is the exceptional degree of nuance achieved, given the full-size string section and slower “speaking” of modern instruments. (Scherchen in fact broke his own record with the Swiss-Italian Radio Orchestra in Lugano, 1965, available on Accord—an incredible 7:13, though with inferior orchestra and bathroom acoustic the result is for the curious only.) The development generates an exceptional head of steam, that extended ff canonic passage pumping like the pistons of some infernal engine. All a far cry from Beecham’s suave urbanity with the same players (1951, Sony). The dense textures of the Minuet come across as a little string-dominated by today’s standards, but that silken horn playing in the Trio sounds awfully like the great Dennis Brain. Best of all is the finale, dispatched in a jaw-dropping 6:23. Again, what amazes is less the sheer velocity as such (though to this day it has been equaled only by Gardiner’s 6:17, with the Orchestre Révolutionnaire et Romantique/DG, 1992) but the unstinting edge-of-seat concentration and sheer finesse of the orchestra’s response, especially in the many extended quiet passages, where crucial gradations from p to ppp really register. A rightly legendary Eighth, in the best sound ever. Does that sound like a recommendation?